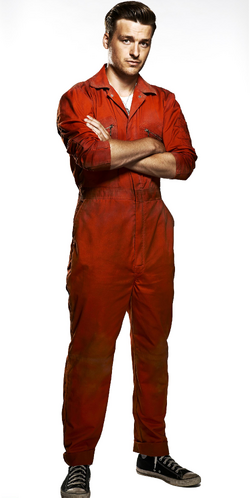 Alex is a member of the current Misfits Gang, introduced early in Series 4 as "Alex from the Bar" working alongside Curtis, before eventually being put on community service himself in early Series 5. Initially without a power, albeit directly affected by Body Part Swapping, Alex gained his own power through a lung transplant at the end of Series 4 - that of Power Removal. He is thought by others to be gay at first, even having sex with women while looking at himself in the mirror and having explicit homosexual sex, however, this was due to his pretentiousness and the way his power works; He is straight.

Alex was introduced as a mysterious and enigmatic new character in S4E2, in which he is the new workmate of Curtis at the Bar frequented by the gang. Jess finds Alex attractive and begins to hit on him, however, when she makes a joke about sexually assaulting a hot barman, Alex becomes very quiet and awkward. Curtis suggests to Jess that it may be because Alex is gay, as Curtis often sees Alex rejecting the advances of girls.

In S4E3, Jess and Alex begin to speak again in the bar, this time getting on quite well, however, when Jess invites him back to her place for a drink, he makes up an excuse that his flat has been broken into, an obvious lie, causing Jess to angrily storm out of the bar.

Alex is seen in the beginning of S4E4 asking Curtis if he and Lola wanted the same drinks again before noticing that Curtis was distracted by Lola's confrontation with ex boyfriend Jake. Curtis committed suicide at the end of the episode.

In S4E5, Alex is followed by Finn and Grace. He is seen conversing with an investigator he hired, later revealed to be looking for the transgender man who stole his genitalea. He takes an envelope containing pictures of who may of stole it, and part ways. Finn records this on his phone, believing it to be him hiring a male prostitute. Because of this, Jess tries to have sex with Alex to see if he is truly gay. To prolong the truth, Alex says he wants to take it slow, and kisses her. Jess and Alex then begin a relationship. Presumably after Jess leaves, Alex is seen hunting down the man who was in the envelope. Alex corners the man in an alley, and asks to see his cock.

In S4E6, Alex reveled to Jess that he has a vagina, and that his cock was stolen by a transgender man with the powers to swap body parts. Alex assumed he and Jess could not be together because of his vagina. However, Jess kissed Alex after his revelation, indicating that she still likes him and wants to be with him.

In S4E7, his investigator has finally tracked down the transgender man who swapped Alex's cock for his vagina. Stopping at nothing to get it back, he brings a gun to the club the man is located at. After an intense confrontation in which he almost committed suicide, he sucessfully gets his cock back. He and Jess immediately leave the club and go back to his flat to have sex. Jess is disappointed when they actually do have sex, Alex is looking in the mirror during most of it.

In S4E8, he is overheard inviting a girl back to his flat by Finn. Finn tries to take action, but is intimidated by him. He cheats on Jess with this girl, only to be caught when she unexpectedly comes back after helping break out Nadine. Immediately, Jess breaks up with Alex. Alex goes to the community centre to apologize, when Finn tries to fight him after hearing what happened. As he floors Finn, Nadine summons the 4 Horsemen of the Apocalypse. After locking the doors of the community centre, he is stabbed through the lung by a Horseman. Once the Horsemen were banished, the Misfits got him to the hospital, where he is last seen getting a lung transplant. It is heavily implied that he will get a power along with his new lung.

In S5E1, Alex awakens from his lung transplant in the hospital to find a girl called Emma begging him to have sex with her.She is quickly removed from the premises. Rudy later visits Alex to cheer him up. This is where Alex first starts to bond with him. Emma later comes back to him having followed him to his flat and explains that the lung he was given in the operation belonged to someone she used to know called Neil, who had the ability to erase powers from other people by having sexual intercourse with them. Emma suffers from a power that causes accidents that injure her to happen all the time, and wants Alex to have sex with her so she can get rid of it. Alex is at first sceptical, but after witnessing her get run over by a car and put in hospital, he agrees to have sex with her and succesfully erases her power.

Meanwhile, Finn is given a power that allows him to turn other people into Agents of Satan, so Alex, Jess and Rudy Two plan to attack him and stop him from converting more people. They send Jess into the bar with a gun to threaten Finn, however, Rudy Two reveals he has been an Agent all along, and starts a fight with Alex. Alex manages to escape, but inside Jess' gun is not working, and she too is converted. Alex then later breaks into the community centre and has anal sex with Finn to erase the power controlling him and the others. The probation worker, Greg, walks in on this, and is visibly shaken. Alex is later put on community service with the others for breaking and entering into the community centre, piecing the ASBO 5 back together.

In S5E2, Alex begins to bond with Abbey and Finn, first with Abbey about tracking down her identity and later with Finn when they stand up to Derren and his gang to save Sam.

Before the storm, Alex was promiscuous, having slept with at least 46 women. (S4E6) He is also vain, selfish and self-absorbed; for example staring at himself in the mirror whilst having sex with Jess, and later cheating on her. However, circumstances at the end of Series 4, and throughout Series 5, have caused him to become more selfless, even engaging in heroic acts (such as saving Jess' life by nearly sacrificing his own, using to power to remove "bad" powers from people, ending up on community service himself to help the others). However, his improving nature may have been forced by being put under a gypsy curse which forced him to help people when asked, or feel as though he were drowning. Despite a long-standing animosity towards "that little prick" Finn, Alex actually saved Finn's life from a suicide attempt. (S5E6)

Alex was not hit by the Storm and so initially had no power.

"Just show me your cock."
— Alex interrogates a man in a dark alley

"I got the chance to use my cock for good..."
— Alex talks to Jess whilst raping Finn

Retrieved from "https://e4-misfits.fandom.com/wiki/Alex?oldid=31222"
Community content is available under CC-BY-SA unless otherwise noted.