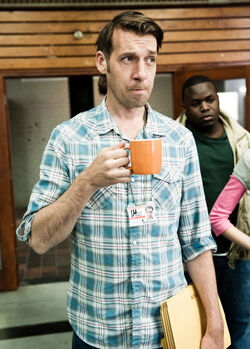 Craig Parkinson portrayed Shaun in Series 2 and Series 3. In Episode 5 (Series 3), his character was killed, marking his last appearance in the series. Craig is also known for his roles as Tommy Flynn in In with the Flynns, DS Matt "Dot" Cottan in Line of Duty, and the twins Jimmy and Johnny Kray in Whitechapel.

Craig is also married to Susan Lynch, an actress from Corrinshego, Northern Ireland. He and Lynch have a son.

Retrieved from "https://e4-misfits.fandom.com/wiki/Craig_Parkinson?oldid=30095"
Community content is available under CC-BY-SA unless otherwise noted.