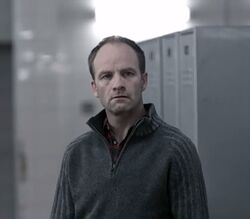 Dave was Jessica's father. He is very protective of his daughter which reflects the power given to him in the Storm. His power causes him to be overwhelmed with rage and kill anyone who gets sexually close to Jessica. He killed Nathan after he accidentally saw Jessica in the changing rooms - Nathan only being saved thanks to his power, he then killed a young man named Chris, who tried to come on to Jessica, and a guy who he accidentally mistook for Simon as they were wearing the same costume at a fancy-dress party (having previously seen Simon talking with Jessica).

He also expressed some physical symptoms, such as his eyes turning blood-red around the pupils and his face quivering when he feels murderous rage, suggesting that the storm caused a similar mutation in him to the one triggered in the group's original probation worker. He almost killed Simon when he discovered that Simon took his daughter's virginity, but Alisha found him and knocked him out after hitting him with a fire extinguiser. He was then arrested by the police.

Retrieved from "https://e4-misfits.fandom.com/wiki/Dave?oldid=27673"
Community content is available under CC-BY-SA unless otherwise noted.