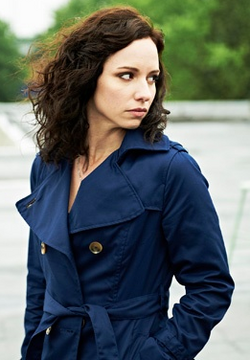 Debby was an aspiring actress. She created a character called "Lola" as part of her acting class, but after the Storm hit, her personality was erased and replaced with Lola's.

Nothing is known about Debby, but she seems like a nice young woman who really wants to become an actress. In a DVD of her acting class, she was seen really committed to the job and really keen on trying to make this work for her. When Curtis ressurects Jake, he tells him that she owns the number 68 flat in High Hills.

Debby invented a complete backstory for "Lola", a story she belived to be true after the Storm. Lola was a young girl from a broken home. Her mother died when she was 15 and her father used to beat her. Eventually, she ran away from her father and fell in love with a guy called Jimmy, who started to pimp her out. Because she didn't have anywhere else to go, she stayed and worked as a prostitute for him. Eventually, something inside her snapped. She seduced a drug dealer and made him kill Jimmy. It was then that Lola decided that she is never going to be a victim ever again and that she would use men like they used her.

"Lola" then continued to use men like that. She met a guy called Jake, who fell in love with her. She told him she has a violent ex-boyfriend who wishes to kill her. After Jake killed him for her, she dumped him and moved on to the next guy. She arrived at the Community Centre, where she met Curtis. Curtis immediately noticed her and introduced himself to her and Lola lied and told him she was a trainee probation worker. After a week of flirting, Lola and Curtis began dating.

While attending to a party at the Bar, Curtis saw Lola talking to Jake. Lola lied and told Curtis that Jake is her ex-boyfriend who stalks her and wants to kill her, when in fact Jake simply wanted to get back together with her. She hit herself in the head and told Curtis that Jake did it and said she was very scared. Curtis insisted on paying a visit to Jake, and Lola gave him a gun for protection. When Curtis got to Jake, he snapped and accidentally shot him, killing him instantly. After Curtis told Lola he'd killed Jake for her, she disappeared and moved on to do the same to another guy.

Curtis, who was in love with Lola, wasn't giving up on her. He asked Greg, the probation worker if he had seen her and Greg told him that there was never a trainee probation worker. A confused Curtis decided to pay another visit to Jake, this time to resurrect him and ask him about Lola. Rudy, Finn and Jess followed him to Jake's apartment. Jake didn't know much, as Lola was doing to him what she has done to Curtis, except he did know Lola's address. Due to Curtis's power's side effect, Jake became a zombie and Finn was forced to kill him, not before he got a hold on Curtis and bit him.

Curtis went over to Lola's place, where he found a DVD named "Lola". He played it and discovered that Lola is just a character. In the meantime, Lola was with her new victim, Pete. She told him that Curtis is her mad ex-boyfriend and that she is very scared. Pete then kidnapped Curtis to a deserted warehouse and was going to kill him, but regretted at the last minute. Seeing that Pete isn't going to kill Curtis, Lola shot and killed Pete and then shot Curtis, making it look like they shot each other. But Curtis remained alive as a result of Jake's bite, bit Lola as well and then killed her.

Lola brought the end of the original ASBO 5, as Curtis was the last member left on the community service program and he had to kill himself due to the infection caused by his power.

Retrieved from "https://e4-misfits.fandom.com/wiki/Debby?oldid=27914"
Community content is available under CC-BY-SA unless otherwise noted.