The power to split oneself into copies, embodying suppressed emotions

When Rudy feels strong emotions (for example, seeing his first true love, Alisha, again) he starts having seemingly painful stomach aches, and then a copy of himself "jumps out" of him.

The copy, known as Rudy Two (sometimes "Rudy Too" or "Other Rudy"), has the same memories as Rudy, but a different personality. Being the incarnation of Rudy's insecurity, Rudy Two is shown to be much more emotional and sincere, and tells his "model" hurtful truths. This often brings conflict between the two, as a representation of personality crisis. According Rudy Too himself, he was born out of a split-personality disorder.

When letting his emotional side out, Rudy's personality doesn't seem to change much, and even then can show emotions by himself, as he told Alisha she "broke his heart" after splitting into two. However, he did state he "always felt funny when he's not inside of me."

It is later revealed that there is a third Rudy, who is much crueler and violent than the other two Rudys.  Psycho Rudy was able to forcefully merge with Rudy, then take over their shared body, as well as later absorb Rudy Two and take control of them both. Rudy was only able to take control of the body for a few seconds, which required great effort and seemed painful.

Rudy, the bearer of this power 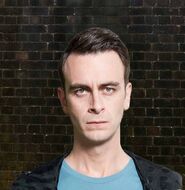 Rudy Too, his duplicate representing his sensetive side

An example of the difference between Rudy and Rudy Two

It is revealed that Geoff, Rudy's father, has the same power. His duplicate represents his violent, abusive side that he often tried to suppress, much like Psycho Rudy. When the two Geoff's are separated, the original is a much kinder man, and the duplicate takes all the violent tendencies. The two Geoff's do not get along at all, making a pact to stay away from each other. When this promise was broken, Geoff's duplicate planned to hunt him down and kill him.

Community content is available under CC-BY-SA unless otherwise noted.
Advertisement