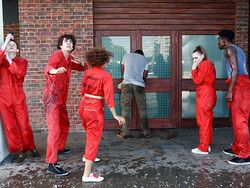 Episode 1 is the first and episode of Misfits.It is aired in November 12,2019.

Six young offenders arrive at the Wertham Community Centre to begin their community payback. A few hours into the service a strange storm arrives and hits five of them with lightning causing strange new powers to present themselves. Unfortunately they aren't the only ones affected as they soon find out.

Nathan, Kelly, Curtis, Alisha, Simon and Gary are a group of misfits. They have nothing in common except the 'Community Payback' scheme they’ve been lumbered with at their local Community Centre, for various crimes and misdemeanors. When the group get caught in a freak storm on the first day, everyone but Nathan discovers they have super powers.

Kelly is the first to find she has developed an ability, respectively followed by Simon, Curtis and Alisha. Nathan is shocked to realise that he is the only one who seemingly has not gained a power. The storm also affects their probation worker, Tony, mutating him so he has super strength and a powerful hatred towards the "ASBO scum" he supervises. He brutally murders Gary with an axe, and attempts to murder the other Misfits. He kills Kelly, but Curtis discovers his ability when he unwittingly turns back time to a few moments before Tony kills her.

This time, Kelly knocks a crazed Tony to the floor with a paint can and as he tries to recover, she kills him in self-defence. The group think the police will not believe their account and to conceal the act, they decide to bury Gary and Tony's corpses under a nearby flyover. Gary and Tony are the first two to die (Kelly's death is 'undone' by Curtis' power), that we know of, after the freak storm has bestowed power on some in the community.

Retrieved from "https://e4-misfits.fandom.com/wiki/Episode_1_(Series_1)?oldid=30980"
Community content is available under CC-BY-SA unless otherwise noted.