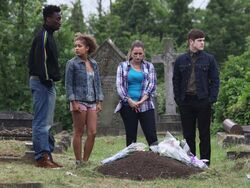 Episode 1 is the first episode of Series 2 and the seventh episode of Misfits overall.

The episode primarily focuses on Simon Bellamy, his past and his crazy stalker, Lucy.

"Superhoodie" stalks the gang and Simon gets a stalker of his own. A new probation worker takes the place of the murdered Sally. Nathan rejoins the gang.

"Superhoodie" is keeping close tabs on the ASBOs, his wall plastered with pictures of them. He free runs across the roofs of many buildings and stops to throw a paper aeroplane, which flies over the river and hits Kelly in the eye. On the paper is a message reading 'Go to his Grave' (presumably Nathan's).

With Sally "missing", a new probation worker named Shaun takes her place. His is a "let's just get through this" approach. He assigns the gang to work with an art therapy class for the mentally ill, the first task being to paint over s*** mural they've done. A mousy girl in class, who remembers Simon from their time in the psych unit, seems to be obsessed with him and insists that he meet her later in the day. He instead goes to Nathan's grave with the rest of the gang, where Kelly hears Nathan's thoughts upon which they disinter his coffin and learn that he is immortal. They return to community service the next day and Simon is confronted by Lucy, the girl from art therapy class, angry that he did not meet up with her and accuses the others of taking him away from her. Simon is later in the locker room when Alisha makes sexual advancements upon him, after she leaves the room it is revealed that it was not Alisha but Lucy who has the ability to shape shift.

Lucy causes a lot of confusion between the group as she shape shifts into most of their forms and pretends to be them in an attempt to drive them away from Simon. In a scuffle between Lucy in Simon's form and Nathan in the locker room, Nathan is impaled on a pipe but no action is taken to help him by the rest of the group as he is immortal and they are trying to work out which of them is actually Lucy in disguise. Curtis enters the room and Kelly tells the group that she has read his mind and it is actually Lucy. She proceeds to try and suffocate him however we know that "Kelly" is in fact Lucy. 'Superhoodie' comes to the rescue; he turns the power off and in the dark, rescues Curtis and puts him in a safe place then leaves. Simon gets a phone call and when Kelly asks who the caller is he replies "It's you" and it is revealed that Kelly is the one that Lucy had shape shifted into.

Lucy shape shifts back into herself and tells Simon that she plans to go to the police station in his form and confess to murdering the probation worker so that Simon will be put back into 'the unit' and they can be reunited. Simon convinces her that she should not do this and apologizes for ignoring her. The group decide to dump the body of the probation worker in the lake and discuss who they think saved Curtis, all the while 'Superhoodie' watches them from afar.

Retrieved from "https://e4-misfits.fandom.com/wiki/Episode_1_(Series_2)?oldid=30173"
Community content is available under CC-BY-SA unless otherwise noted.