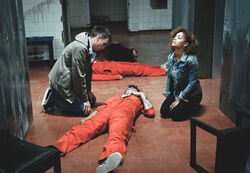 Episode 1 is the first episode of Series 3 and the 14th episode of Misfits overall.

The episode primarily focuses on new character Rudy Wade, his special power and his connection to Alisha.

Rudy starts his community service and finds out about the dangers of having a superpower. As he finds it hard to keep his ability a secret, the community centre's regulars try out their recently acquired skills following the deal with Seth. They have no clue though that they will soon be forced to deal with a threat unlike anything they have encountered in the past.