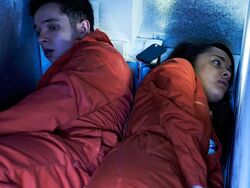 Episode 1 is the first episode of Series 4 and the 22nd episode of Misfits overall. It marks the introduction of Jess (Karla Crome), Finn (Nathan McMullen) and new probation worker Greg (Shaun Dooley).

New gang members Finn and Jess are zipping up those iconic orange jumpsuits for their first day of community service and expecting to meet their probation worker. But things get a bit strange when a man stumbles into the community centre with a briefcase and a power that infects them all. The truth unravels in a series of tense flashbacks and it's soon clear to Finn and Jess that there's more to community service than scrubbing off graffiti and picking up litter...

The story picks up with Finn and Jess in the community centre ready to start community service. Due to the day before Rudy, Curtis and Seth find it suspicious. Trying to figure out what is going on Jess follows Rudy until he enter the storage room and uses her X-ray vision to see what is happening. Rudy and Seth locked Curtis in the freezer. The two new young offenders immediately help him and he escapes. When confronted, Rudy tells Finn and Jess that a man (Mike) walked in with a case full of money handcuffed to his wrist and when they touched him they had a raging hunger to steal the money within the case. Discovering that Rudy had spiked their drinks Finn and Jess wake up locked in the freezer only to accompanied by Mike a few minutes later and infecting them with the greed also. Rudy's double frees then and tells them that he actually has the case that everyone is now looking for. In order to distract them Finn using his power of telekenisis but it fails miserably. He ends up grabbing the case anyway and runs up to the roof with the other 4 following him. Mike grabs the case but falls off the roof and dies and his power is lifted. They bury the body and when the return their new probation worker greets them with a frightening story scaring the audience shitless. Rudy ends the show with "Chances are he'll be dead within a week anyway"

Retrieved from "https://e4-misfits.fandom.com/wiki/Episode_1_(Series_4)?oldid=30332"
Community content is available under CC-BY-SA unless otherwise noted.