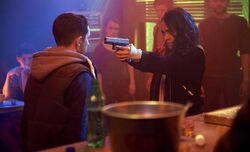 Episode 1 is the first episode of Series 5 and the 30th episode of Misfits overall.

In the first episode of the final series, handsome barman Alex discovers that he has acquired a strange new superpower that he has to use on one of the gang.

The ensuing chaos sees Alex doing community service and finally joining the rest of the guys in orange.

The series begins on the first anniversary of the Storm, and Alex wakes up from his lung transplant. A woman is by his bed begging to have sex with him, but she is quickly escorted away.

During community service, the gang discover a scout group in the community centre. Lucy, one of the female members, flirts with Finn and later seduces him, tying up his hands and tricking him into laying in the middle of a pentagram. The rest of the scouts gather with Keith, their scout leader, who sacrifices a chicken and is about to convert him, but Finn uses his telekinesis to stab Keith in the cheek with his own pen knife. Finn escapes to the bar covered in blood to warn the others about the demonic scouts, but no one believes him. Later he runs into Keith in the bathroom, and once again Finn uses his telekinesis to push a bar of soap in his way, making him slip on it and breaking his skull. As he dies, he transfers to Finn his Satanic power to convert others.

Meanwhile at Alex's apartment Emma, the woman who he saw at the hospital, visits him and explains to him her situation. Her power was an inconvience to her, as it caused accidents wherever she goes. At that moment the door slams shut on her hand, revealing her power to Alex. She explains that she met a man who had the power to remove people's powers by having sex with them and he had offered to remove hers, but he died before he could. She once again asks Alex to have sex with him and strips down, showing him all her scars and injuries she had acquired from all her accidents. Jess knocks on the door and vents her anger at Alex, then sees Emma half-naked behind him and tells him it's easier to break up with him now, seeing as he hasn't changed. A few days later Alex sees Emma calling out for him, but before he can do anything a hit-and-run incident leaves her unconcious. He visits her at the hospital and, feeling regretful, has sex with her and removes her power.

Meanwhile Rudy Too joins a Power Support Group, meeting a person trapped in a turtle's body, Maggie, an elderly woman who knits visions of the future, and Tim, a man from Series 2 who believes he is living in a Grand Theft Auto-style computer game. Since Tim was last seen he has clearly made progress in rehabilitating, as he now tries to suppress his power. Maggie knits Rudy a jumper depicting his future, revealing mysterious figures, possibly members of the gang, using their powers.

At the bar Finn, now possessed by Satan, threatens to glass Alex after losing his temper. Jess stops him, and everyone now begins to suspect something is wrong. That night at the community centre Finn tricks Rudy into sitting in the middle of the pentagram, and the scouts begin converting him. At the same time Jess visits the community centre and finds a Satanic book that Finn owns. Abbey enters the room and confronts her, and when Jess discovers the dead chicken Abbey is holding behind her back she realises that Abbey has been converted. She leaves the room and runs into Finn and Rudy, who is now converted as well. She escapes to Alex's house and tells him what's happening, and they are joined by Rudy Two. Rudy Two has discovered a way of returning them to normal, by throwing holy water on them and saying the right incantation. Alex gives Jess a gun to use in case of emergency.

Jess, Alex and Rudy Two go to the bar where Finn, Rudy and Abbey are. Alex and Rudy Two wait outside while Jess enters the bar and holds a gun up to Finn. Finn insists that he is the same, just a better version of himself. Jess throws the holy oil on him and chants the incantation, but Finn merely laughs. Jess tries shooting and realises the gun isn't loaded. Outside the bar, Rudy Two reveals to Alex that he's actually an Agent of Satan and has taken the bullets out of the gun. Rudy Two attacks him, but Alex easily overpowers him.

Back at the community centre everyone in the gang except Alex has been converted. Alex knows what he must do to stop this, and breaks a window to get into the centre but is seen by Shaun from a distance. Finn seduces Jess in a room with a bed and rose petals scattered everywhere, but Alex comes out from hiding, knocks Finn unconscious, and ties Jess up in the corner. He lies Finn on the bed and apologises to Jess before anally-raping Finn who is still unconscious. Greg opens the door and sees what's going on, before apologising and retreating, sitting outside the room with a melancholy and reflective expression. As Alex removes the power Finn wakes up and realises what's happening. Now with the Satanic Conversion power permanently gone, Alex, Finn and Jess are all embarrassed by what just happened.

With everything back to normal, the gang is back to their community service, now joined by Alex since he was caught breaking and entering the community centre. Alex and Finn are insistent that everyone sweeps what happen under the rug, but Rudy continues to make sexual innuendos much to Finn's and Alex's displeasure.

Retrieved from "https://e4-misfits.fandom.com/wiki/Episode_1_(Series_5)?oldid=30527"
Community content is available under CC-BY-SA unless otherwise noted.