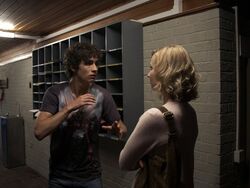 Episode 2 is the second episode of Misfits.

The episode primarily focuses on Nathan Young and his complicated relationship with his mother.

Nathan, Kelly, Curtis, Alisha and Simon are sent to help at an elderly home as a part of their probation. During a dance with the elderly, Nathan meets and falls for Ruth, a beautiful young volunteer. While the two are hanging out outside the community centre, Nathan spots Jeremy (his mother's boyfriend), who is naked and seems to be scrabbling in some nearby rubbish bins.

Nathan attempts to confront him but is leapt upon and licked by the hyper Jeremy. He escapes the embrace, but manages to take a quick photo with Ruth's phone. Curtis and Alisha continue their flirting, while Simon meets a mysterious girl on the internet, "Shygirl18", who shows an interest in his videos (especially the video of the storm that gave the Misfits their powers). Kelly learns that Nathan is homeless and tries to reach out to him, only for Nathan to snap back at her. Nathan shows his mother the photo of Jeremy's attack and she reveals that he also was affected by the storm, in that he mentally turns into a Jack Russell Terrier, his beloved childhood pet, on some nights. Nathan tells Ruth that he was declared an ASBO for stealing some candy from a Pic 'n' Mix bin.

He learns from Ruth that his mother needs her relationship with Jeremy, and that Nathan should not be so selfish about protecting his own mother-son relationship by destroying the mother-Jeremy one. Nathan returns Ruth's phone and she invites him in. Soon enough, she takes him upstairs. As Ruth mounts Nathan, he is horrified to see her morphing into an old woman. We discover Ruth is in fact an 82-year-old woman who, thanks to the storm, managed to become her young self again.

Ruth panics over slowly losing her power, but Nathan just storms out. Nathan later arrives to apologize to Ruth, only to discover her corpse, in her 82 year old form. He therefore at least reconciles with his mother and threatens Jeremy to be good or he'll take him "to the vet to be put down". Meanwhile the whole group is threatened, as someone has started leaving messages on their lockers: that they know what happened to the probation officer.

Ruth is the third to die, that we know of, after the freak storm has bestowed power on some in the community.

Retrieved from "https://e4-misfits.fandom.com/wiki/Episode_2_(Series_1)?oldid=31069"
Community content is available under CC-BY-SA unless otherwise noted.