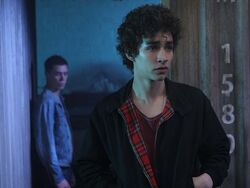 Episode 2 is the second episode of Series 2 and the eighth episode of Misfits overall.

The episode primarily focuses on Nathan Young and his complicated relationship with his father.

While Nathan is sunbathing, a mysterious stranger named Jamie turns up and surprises the misfits. He reveals that he and Nathan share the same dad. Nathan takes Jamie to the pub and while there he has a run in with a girl behind the bar who turns the bottles on the bar into ice. Nathan confides that he also has a power, immortality, and defends her against her abrasive boss. This results in him getting punched in the face but he does manage to win over the girl and receives her phone number. As they leave the pub Jamie becomes distressed when he realizes his car is missing and he reveals that he tied up their father and put him in the trunk with the intention of forcing him to meet with Jamie's abandoned mother. Jamie and Nathan find the car, stolen by a group of youths, and manage to retrieve it.

However shortly afterwards, as they are letting Nathan's dad out of the car, the police arrive and all three are taken to the station. Nathan's dad discusses Jamie with Nathan and describes why he chose to stay with Nathan rather than Jamie's mother. They begin arguing and his dad walks out as Jamie is released. As Alicia is walking home she sees Superhoodie free running and jumping over the buildings and she films him with her phone. She shows the group and Nathan retells the story of Superhoodie saving him from the Virtue members in the Season One finale. The group realise the two are the same and that he must have a deep knowledge of their powers.

The group decide to go to a party that night and Nathan reveals his potential date with the girl from the bar, mainly to irritate Kelly. As they arrive at the party they all take pills, including the girl from the bar, however Simon refuses to take the drugs. When he is distracted Jamie spikes his drink and he too is drugged. The drugs have a strange effect on the misfits, reversing all their powers: Kelly verbalises every thought she has including telling Nathan she thinks she loves him after he admitted he picked her over the girl at the pub; Simon becomes the centre of attention; Alisha is repulsive to others; Curtis goes to the future and sees a vision. In this vision he is standing on a rooftop dressed like a superhero and he then turns around and begins kissing a strange girl who is also on the rooftop and seems to have some previous relationship with him. Jamie and Nathan's girl from the pub go to the car to have sex and her powers also reverse, causing her to burst into flames. Nathan is saved from the explosion by Superhoodie and Jamie also manages to escape the flames. Simon then follows an injured Superhoodie back to an apartment but doesn't go in.

Nathan reveals his powers to Jamie and Jamie decides to make amends with his dad. Nathan goes with Jamie to visit him and then learns that Jamie perished in the fire and his dad just identified the body. Nathan's reversed power meant that he could see dead people. Jamie urges him to reunite with his father and Nathan sees him one last time, disappearing with his arms around the girl from the pub. Curtis lies to Alicia about his vision of the future, omitting his kiss with the other woman. Simon takes the group back to the apartment Superhoodie went to but they realise it's a girl's apartment and therefore not Superhoodie's. However as Curtis goes to leave the owner of the apartment enters and we see it is the girl from the rooftop in Curtis' vision.

Retrieved from "https://e4-misfits.fandom.com/wiki/Episode_2_(Series_2)?oldid=30825"
Community content is available under CC-BY-SA unless otherwise noted.