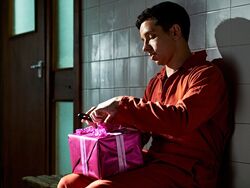 Episode 2 is the second episode of Series 4 and the 23rd episode of Misfits overall. It marks the final appearance of Seth and the introduction of Alex.

Finn isn't quite as innocent as he looks when a dark secret he's been hiding at home is revealed. Can Seth be persuaded to come out of retirement and take a power before someone gets forced into submission? And Rudy and Curtis go into battle over a beautiful blind girl, while Jess meets new super-sexy barman Alex.

Retrieved from "https://e4-misfits.fandom.com/wiki/Episode_2_(Series_4)?oldid=30342"
Community content is available under CC-BY-SA unless otherwise noted.