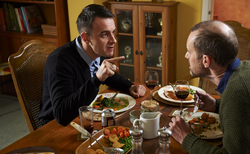 Episode 2 is the second episode of Series 5 and the 31st episode of Misfits overall.

While the gang are out on the estate picking up litter, Rudy discovers that his dad is having an affair. With some help from Jess, Rudy investigates further and finds out his dad has a superpower of his own, a dark secret he has kept hidden from his family.

As Rudy and Jess find themselves thrown together, Rudy is shocked to discover he has feelings for her. Meanwhile at the superpower support group, Rudy Two meets a mysterious boy with the power to fly and he starts to believe that the jumper Maggie knitted him really does hold the secrets to the gang's future.

While the gang are out on the estate picking up litter, Rudy discovers that his dad, Geoff, is having an affair. With some help from Jess, Rudy decides to investigates further and visits his parents at home, finding everything to be completely normal. After spying on Geoff at his apartment he sees him violently abusing Tina, the woman he was having an affair with, and angrily disowns him as he had never realised his father could be like this. He plans to invite Geoff out for a drink while Jess investigates the apartment, but while they are out Jess is cornered by what seems to be an identical version of Geoff. Jess rings Rudy and asks him what's going on, and Geoff reveals to his son that the Storm had given him the power of Emotional Duplication - the exact some power as Rudy. There was Geoff I, the original who was a kind and honest man, then there was Dark Geoff, a copy who reflected his violent and selfish side that had affairs and had a short temper.

Rudy finds Tina who has escaped Dark Geoff, but she tells him that he had taken all her money and put it in his bank account so she cannot access it. Rudy offers to help and gets Geoff to empty the bank account and give all the money back to Tina, explaining everything. However, as he returns home for dinner with his parents he notices something odd about his father, and realises that this is in fact Dark Geoff, not the original. He continues to find excuses to get his mum, Pat, to leave the room as he confronts Dark Geoff, who explains that in emptying his bank account the original Geoff had broken a promise that neither of them would interfere with other. He reveals his plan to have sex with Pat, and then killing the original Geoff for revenge. He knocks Rudy out and leads Pat upstairs to the bed.

Meanwhile, Jess is on her way to Geoff and Pat's place when she hears someone struggling inside a car boot. She uses her X-ray vision and sees the original Geoff tied up, and she realises what is happening. Back at the house Rudy has woken up and runs upstairs to stop Dark Geoff before he does anything, but only manages to be badly beaten by him and tied up next to Pat who is confused what is happening. Jess rushes in just in time and knocks out Dark Geoff, untying Rudy and Pat

Dark Geoff wakes up outside and is confronted by Pat, who tells him that the original Geoff explained everything - all the affairs and lies. With Dark Geoff separated from him the original is a much better person, with no desire to lie or cheat at all. She tells Dark Geoff to go away and never come near their family again or she would kill him. He reluctantly agrees and leaves. Geoff and Pat meet Jess properly, whom Rudy introduces as his girlfriend to convince his parents that he isn't gay. However, he begins to discover feelings for her.

Other sub-plots within this episode included the introduction of Sam, a mysterious boy with the power to fly. After Alex and Finn save him from a gang of youths he flies away unnoticed. He is seen again at the end in the Power Support Group, introducing himself as Sam and telling the others that he can fly.

Abbey also finds a scarf in a bathroom that she continues to smell throughout the episode, as it reminds her of something about her past. Though she can't figure out what it is, she finds its owner - a girl named Laura. Abbey is attracted and asks to buy her a drink, and Laura slowly warms up to Abbey.

Retrieved from "https://e4-misfits.fandom.com/wiki/Episode_2_(Series_5)?oldid=30546"
Community content is available under CC-BY-SA unless otherwise noted.