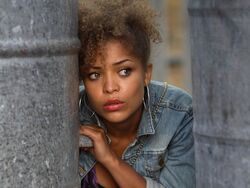 Episode 3 is the third episode of Misfits.

The episode primarily focuses on Alisha Daniels, her power and her growing relationship with Curtis.

Alisha is partying as usual, using her power to gain influence over boys. But the one man she really wants is Curtis, and her power will not make him want her. Meanwhile Simon’s online relationship with "Shygirl18" blossoms, but it is revealed to us this is actually Sally, the female probation worker and the deceased Tony's fiancée, who suspects that the Misfits are involved in his disappearance.

As this is happening, Simon discovers builders digging a hole at the exact spot they buried Tony and Gary's bodies. The Misfits decide to move them that very night, before they are found, and put them in Sally's car boot. She discovers the corpses the next morning.

However, Curtis turns back time and Nathan distracts Sally, preventing her discovery by throwing a brick at her car window. The episode ends with a scene of the builders filling the freshly-dug hole with concrete, after the Misfits have reburied the bodies at its bottom. Simon also reveals that he stole Tony's credit card and booked a one-way flight in his name, so it appears he has fled abroad. Alisha and Curtis decide to try for a relationship, although they accept that due to her ability it cannot become physical.

Retrieved from "https://e4-misfits.fandom.com/wiki/Episode_3_(Series_1)?oldid=30142"
Community content is available under CC-BY-SA unless otherwise noted.