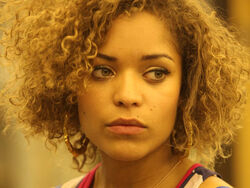 Episode 3 is the third episode of Series 2 and the ninth episode of Misfits overall.

The episode primarily focuses on Alisha Daniels and her discovery of Superhoodie's identity.

The group are left to tidy up a rubbish tip by their indifferent probation worker. After work Alisha is almost mugged by an aggressive young man but she is saved by the mysterious Superhoodie. She realises that he can touch her bare skin with his own and is not affected by her powers. He runs off without revealing his true nature to her but she is intrigued by this mysterious stranger.

Meanwhile Curtis is still dealing with his strange vision of the future and goes to visit the rooftop girl from his vision. He tells her he feels like he knows her but after some rather cutting remarks made by this strange girl he leaves without knowing any more about their future together. Kelly decides to get her tattoo altered after community service and Nathan and Simon accompany her. Nathan's insensitive personality immediately causes tension between him and that tattoo artist, Vince, and Nathan calls him gay. The tattoo artist seems to fixate on Nathan, causing a pain in Nathan's shoulder, but the gang leave without really focusing on it. Nathan strangely invites Simon to have a drink with him and shuns Kelly, who is very confused as she and Nathan are very close but he consistently mocks Simon. Alisha decides to use herself as bait for superhoodie and deliberately gets herself into a dangerous situation. She falls down the stairs and hits her head, waking up in the mysterious den of Superhoodie. It is here where she discovers that Superhoodie is in fact Simon from the future. Meanwhile Nathan seems to be in love with Simon, despite never previously having had inclinations of being gay. Kelly is also very confused by the whole situation and when she sees a tattoo of Simon's name on Nathan's shoulder she goes to visit Vince.

He reveals that he is in love with her and he uses his power to put a tattoo on her back, a heart containing his name and therefore forces her to love him. Simon from the future tells Alisha that they will one day fall in love and that he is there to make sure that certain events stay the way they were intended. He is remarkably different from present day Simon and says that a lot has changed since they first gained their powers. A guilty Alisha is very confused by her feelings and she and Curtis argue. He visits the mysterious rooftop girl and extends a helping hand to her after seeing her breathing from a medical oxygen cylinder, although she doesn't reveal much about her ailment. Alisha runs back to Future Simon but he has to leave in order to make sure a certain event happens. Simon has realised that the tattoo artist caused his friend's strange behaviour and so he takes the gang, minus Alisha, to the tattoo artist. Before they leave Superhoodie throws down a packet of peanuts. When they reach the parlour the tattoo artist draws a knife tattoo on Curtis, stabbing him, but eventually Simon realises Vince has a nut allergy and uses this to force him to reverse his powers, by throwing a peanut into his mouth from far away, the first time he ever demonstrates superhuman aim, like his future self (in the first episode of series 2).

Future Simon catches Alisha watching a video of the future which shows the misfits known as the ASBO 5 and becoming famous. Simon makes her promise not to tell anyone about his true nature or their future and despite being very confused Alisha has sex with Future Simon. He makes her promise to stay with Curtis as Present Day Simon needs more time to develop but he agrees that they are seeing each other. Finally Nathan and Kelly kiss after a long period of sexual tension however Kelly stops him before he goes too far, much to his annoyance, telling him it's like having sex with her cousin and it would be wrong, they both agree to be just friends. The Misfits discuss about their curiosity about superhoodie's identity however Alisha tries to bypass the question and avoids revealing how much she truly knows (although this does seem to provoke suspicion from Simon).

Retrieved from "https://e4-misfits.fandom.com/wiki/Episode_3_(Series_2)?oldid=30190"
Community content is available under CC-BY-SA unless otherwise noted.