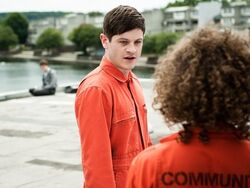 Episode 3 is the third episode of Series 3 and the 16th episode of Misfits overall.

The episode primarily focuses on Simon and Alisha, their relationship and Simon's destiny as Superhoodie.

Still trying to fulfill his destiny by becoming Superhoodie, Simon saves Peter, a geeky comic-book nerd, from being mugged. Peter is in awe of Superhoodie - at last he's found a real super-hero to idolise. Peter strikes up a friendship with Simon, a friendship that soon turns into obsession and threatens to destroy everything that Simon holds dear. Finally, Simon discovers the true sacrifices that you must make to become a real super-hero.

Simon rescues a boy who was being mugged by a vandal. This man's name was Peter. Peter later is part of the new community service group and that is where he notices Simon. He begins to hang out with him, and is astounded that Simon is a type of superhero. Peter confessed that he had an interest in superhero comics, and still fantasises about being one. Simon is seen to become greater and greater friends with him, to the annoyance of Alisha.

More to be added

Retrieved from "https://e4-misfits.fandom.com/wiki/Episode_3_(Series_3)?oldid=30253"
Community content is available under CC-BY-SA unless otherwise noted.