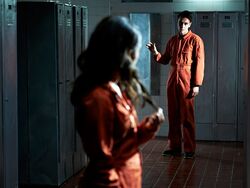 Episode 3 is the third episode of Series 4 and the 24th episode of Misfits overall.

Rudy and his down-beat doppelganger are forced to unite as they have to confront a long-forgotten face from their shared past. Can they put aside their differences in time to save themselves from the killer? There's also a lot of hits going on... Jess hits on handsome Alex from the bar, Curtis hits on Lola the mysterious trainee probation worker, and Finn hits on his step-mum.