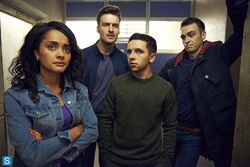 Finn is in an awkward position when it becomes clear that Greg, the probation worker, has a crush on him. After a beautiful duet on the piano of Frankie Goes To Hollywood, Greg's sexual advances to Finn escalate in tension. While searching for the final superhero on his woolly jumper, who appears to be flying, Rudy's alter-ego meets Sam at the Power Support Group.

Retrieved from "https://e4-misfits.fandom.com/wiki/Episode_3_(Series_5)?oldid=30549"
Community content is available under CC-BY-SA unless otherwise noted.