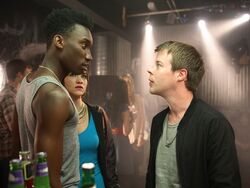 Episode 4 is the fourth episode of Misfits.

The episode primarily focuses on Curtis Donovan and how his choices effect everyone else.

Curtis is confronted by his ex-girlfriend Samantha (Sam), who accuses him of having ruined her life after the two of them were caught with cocaine at a local disco and failing to visit her when she went to jail for six months. Curtis' superpower causes him to turn back time, though his first attempt at changing the past avoids the drug bust but ends with Sam being stabbed by the drug dealer.

His second attempt at changing the past avoids all disastrous consequences that night and revives his Olympic dreams. However, after his power allows him to jump back to the revised present he finds that the other ASBOs (excepting Nathan who explains that he was found only half dead) were murdered by Tony.

Curtis realises this occurred because he was not there to save them[1], forcing him to change history once again to prevent anyone dying. This time he saves Sam by taking all the drugs from her and disposing of them before the police arrive, keeping a small amount in his possession so he will still do community service and be there for the gang.

As a consequence, when he jumps back to a newly revised present, Sam was never imprisoned and they are still in a relationship—suddenly introducing a twist to his budding relationship with Alisha. The episode ends with Sally searching their lockers and finding Tony's credit card in Simon's jeans pocket. We also learn, in the course of Curtis' time jumping, that Nathan was arrested at a bowling alley for stealing a few sweets from a Pic 'n' Mix bin, creating a disturbance when the manager, Beverly, tried to detain him and then, after refusing the aid of his estranged father, stapling Bev's hand.

Retrieved from "https://e4-misfits.fandom.com/wiki/Episode_4_(Series_1)?oldid=30146"
Community content is available under CC-BY-SA unless otherwise noted.