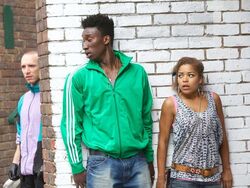 The episode primarily focuses on Curtis Donovan and his growing relationship with Nikki.

Future Simon and Alisha continue their secret relationship. Meanwhile, the group are joined on their community service by a boy named Ollie, who reveals that he can teleport. The group are unimpressed by his demonstration and get back to work. Whilst out picking up litter, they are accosted by a seemingly deranged man called Tim. It becomes apparent that Tim believes he is the protagonist of a violent video game, seeking revenge against a crime boss named Conti, who has supposedly stolen his money. Nathan jokingly tells Tim that Simon is Conti, and Tim seems to believe Kelly is Roxy; his ex-lover. Ollie tries to intervene, only to be shot dead. The rest of the misfits escape unharmed but Tim continues to hunt them. Ollie turns out to be an organ donor and his heart is transplanted into Nikki, who makes a miraculous recovery and finds she has inherited his power.

Alisha visits Future Simon and confronts him after finding out he knew Ollie was going to die. Simon tells her that if he saved Ollie, another person would die (Nikki). Curtis and Alisha are chased by Tim. After avoiding him, they break up, with him thinking of Nikki, and her of Simon. Nikki is at the hospital arguing with the doctors about her new heart, complaining that it's causing her to experience strange things. The doctors brush off her claims as nonsense. Alisha goes to see Future Simon, and tells him that she and Curtis are over. She expresses her wish to run away somewhere with him, and says she's always wanted to go to Las Vegas. Simon promises he will take her there. Curtis meets Nikki at Ollie's memorial, where they bond over a discussion of their powers and Curtis asks her out on a date. Later, Kelly and Alisha are ambushed by Tim on the estate and Kelly is taken hostage. Alisha informs the others, and they find the video game that Tim thinks he is in.

The misfits play the game, and conclude that if they follow its plot, the game will end and Tim will leave them alone. The group plan to rob a bank to acquire the £100,000 that Tim wants from Conti. They steal their probation worker's car and Simon turns invisible in order to take the money undetected. Nathan muses on the fact that neither of them ever thought to use their powers to commit crime before. They drive to the meat factory where Tim is waiting. Simon delivers the money, which "completes" Tim's current level in the game, and he progresses onto the next, in which Tim is now looking for an undercover cop amongst the group. He takes all of them hostage and strings them all up to meat hooks. He threatens to kill them all with a chainsaw if the undercover cop doesn't confess. Nikki, who is waiting for Curtis to show up for their date, gets fed up and leaves, but she accidentally teleports to the factory. She unsuccessfully tries to free the group, and is strung up herself. Tim decides to kill Alisha first, but Nathan reluctantly owns up as the cop, owing to the fact that he is immortal.

Curtis kicks Tim in the face while he's distracted, and Alisha tries to escape, but Tim soon catches up with her. He shoots at her, but Future Simon drops down from a skylight and takes the bullet. Alisha removes Simon's mask, and Tim thinks he is Conti. Future Simon tells Tim he is the undercover cop, thus ending Tim's game, and he leaves to engage in his bonus level of breaking a prisoner out of jail. Alisha tells the dying Simon that she loves him, but doesn't know if she can love Present Simon. Future Simon tells her that it is Alisha falling in love with him that makes Present Simon become him in the future. He then requests that she burn his body so he can't be identified, and dies. Back at the community centre, the group learn that Tim was arrested breaking into a prison. Alisha tries to say something to Simon, but can't and he leaves. Alisha goes to future Simon's lair and cries as she looks at the photos all over the wall. She takes one in particular, which shows her and Simon together in Las Vegas.

Retrieved from "https://e4-misfits.fandom.com/wiki/Episode_4_(Series_2)?oldid=30194"
Community content is available under CC-BY-SA unless otherwise noted.