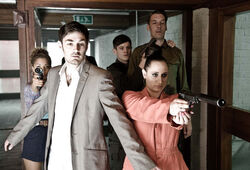 The episode primarily focuses on Kelly Bailey in an alternative timeline and on her growing relationship with power-dealer Seth.

An old Jewish man named Friedrich plans to use Curtis's old time-rewind super-power to go back in time and kill Hitler. But his plan goes horribly wrong and the gang find themselves in an alternative timeline where the Nazis conquered Britain. With the Nazis growing stronger as they force Seth to 'deal' them super-powers, it's up to Kelly and the resistance to fight back. As the Nazis close in, Kelly and Seth find themselves drawn to each other.

Retrieved from "https://e4-misfits.fandom.com/wiki/Episode_4_(Series_3)?oldid=30274"
Community content is available under CC-BY-SA unless otherwise noted.