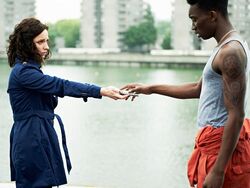 Episode 4 is the fourth episode of Series 4 and the 25th episode of Misfits overall. This episode features the departure of longest serving original cast member; Curtis.

When Curtis' new girlfriend Lola disappears, Curtis discovers that she was never the person she claimed to be. As he investigates further, he is forced to use his power to bring someone back from the dead, with disastrous results. Meanwhile, Rudy and Finn have a disagreement about their shared living arrangements at the community centre, and Jess finally gets closer to mysterious barman Alex.

Retrieved from "https://e4-misfits.fandom.com/wiki/Episode_4_(Series_4)?oldid=30390"
Community content is available under CC-BY-SA unless otherwise noted.