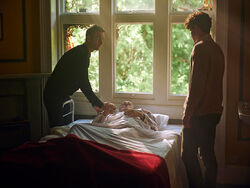 Episode 4 is the fourth episode of Series 5 and the 33rd episode of Misfits overall.

Since attending the superpower support group, Rudy's alter ego Rudy Two has become more of his own person. And while the gang are out on community service they come across a bumbling old man who turns out to be more than he seems.

They also encounter Helen, an electrician with a power that might just hold the key to understanding the 'mysterious knitted jumper'.

The gang are out for another day of community service, and Rudy mentions that Rudy Two has been gone for several days and doesn't know where he is. At that moment an old man stumbles up to them in a dressing gown, muttering nonsense. They recognise the tattoos on the man as being the exact same as Rudy's, and so realise that this is in fact an older version of Rudy Two. Rudy puts it upon himself to find out who did this to Rudy Two, getting Jess to look after the older Rudy at the Community Centre as he, Finn and Abbey go to the Power Support Group to find out which one of Rudy Two's friends did this to him. Pretending to be Rudy Two and introducing Finn as his friend who has the power to lactate whenever he lies, Rudy starts to greet the members of the Power Support Group. Meanwhile Finn meets Stuart, a homosexual who is the literal embodiment of the phrase "trapped in the closet"; that is, whenever he denies his sexuality he teleports into the nearest closet. Finn tells him that he has a friend who can take powers away. Abbey also meets Mark, a man who is trapped in the body of a tortoise.

Rudy decides that Maggie is the guilty one, and so brings Finn along with him to visit her house. When he arrives he realises that Rudy Two visited her at this time every week, and has been living an entire life apart from Rudy helping members of the community with powers. He finds out that Maggie was not guilty and instead knits visions of the future, rather than changing people's ages. He also finds out that he is due for an appointment with Tim at the bar, as Rudy Two has apparently been helping him as well.

Rudy and Finn turn up to the bar and meet Tim, a man afflicted with hallucinations that make him believe he is in a violent video game. He is in a panicked state, telling Rudy that his hallucinations are getting worse as he woke up that morning with a bag with a gun and money in it. He explains that he wears an elastic band that he snaps on himself whenever he feels his hallucinations coming back. At that moment his hallucinations flicker on and he holds the gun up to Rudy's head, but Rudy snaps the band and returns him to normal.

Returning back to the community centre Rudy catches the eye of a mysterious boy kissing another girl called Naomi, and Rudy briefly makes eye contact with him. The boy, called Len, is confused and follows both of them. Finding the old Rudy Two, Len apologises for what he's done and tells him that he has fallen in love and can't stop now. He attempts to kill him but Rudy and Jess hear Rudy Two's cries for help and appear just in time, but fail to see the culprit. Rudy organises a schedule for the gang to take turns looking after Rudy Two. Rudy also develops a deeper connection with Rudy Two as they reminisce on their emotional childhood, and Rudy discovers the jumper that reveals the four superheroes.

During a cup of tea outside Rudy Two suffers a heart attack, but is quickly rescued by Helen, an electrician who can control electricity. She jumpstarts Rudy Two's heart and saves him, but quickly disappears. Rudy and Jess begin to consider Rudy Two's future and imminent death, and decide to put him in a nursing home. At the nursing home Len as seen with Naomi again who happens to be one of the nurses, and he sees Rudy leaving.

Rudy visits Rudy Two at the nursing home, and they are interrupted by Naomi who is confused to see him as she explains she usually saw him visiting Mr Johnson, but Mr Johnson hasn't been seen for a while. Rudy is confused and leaves, looking around at all the other rooms to investigate what is happening. He finds a room marked Mr L. Johnson, and inside finds old photos of Len alive in the 1930's. Meanwhile, Rudy Two is visited by Len who tells him that he can't risk everything being ruined. He tries to suffocate Rudy Two witih a pillow, just as Rudy recognises the boy from the photos and rushes back to Rudy Two's room. He throws Len off and holds him against the wall, and Len explains that Rudy Two used to visit him every week and swap ages for an hour so Len Johnson could have a break from being an old man. However, Len ended up falling in love with a Naomi and evntually refused to change back. Rudy threatens to reveal everything to Naomi if they don't switch back, and so Len reluctantly turns back into an old man and lets Rudy Two return to his normal age. Back at the community centre Rudy asks Jess out for a drink, and she accepts.

At the Power Support Group Rudy Two shows Sam the jumper Maggie knitted for him, showing the future. Sam partly decodes it, considering that the flying figure on the jumper is him and the one standing on the building is Rudy Two. Rudy Two also considers that the figure shooting electricity is Helen, the young electrician who saved his life, but the fourth camouflaged figure remains a mystery.

Back at Maggie's home she is knitting another jumper. It is slowly revealed, and depicts Finn, Jess and Abbey lying in a pool of blood.

In a subplot, Alex begins to discover that he can use his power to help people. Finn hooks him up with Stuart from the Power Support Group who approaches him asking to take his power. After meeting up Alex reveals the irony of the situation; he must have anal sex with a homosexual man to remove his power. Stuart reveals that he is trapped in the closet because his father won't accept him, and Alex provides some helpful guidance. However, despite Abbey begging for Alex to use his power to change Mark from a tortoise into a human he still refuses to have sex with the tortoise.

Retrieved from "https://e4-misfits.fandom.com/wiki/Episode_4_(Series_5)?oldid=30559"
Community content is available under CC-BY-SA unless otherwise noted.