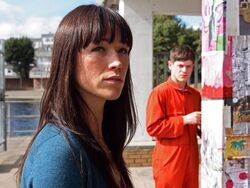 Episode 5 is the fifth episode of Misfits.

The episode primarily focuses on Simon Bellamy, his loneliness and his feelings towards his probation worker, Sally.

Determined to prove that the gang were involved in Tony's disappearance, Sally continues to focus her investigation on Simon, pursuing a fake relationship with him to try and find evidence that the Misfits are responsible for Tony's suspected death. At the same time, Nathan falls victim to the storm-based mental powers of Finn, a nine month old baby being raised by a single mother, who succeeds in making Nathan act as his father ("Him and his mum can come and live with me at the Community Centre. I'll get free food from the vending machine. And booze from the kitchen. I'll steal from other babies.").

Kelly is able to determine what is happening thanks to her ability, and convinces Finn's mother to make contact with Finn's real father, assuring her (knowing Finn's storm-power) that the guy will want to pursue his fatherly duties as soon as he sees Finn. Kelly afterward invites Nathan to her flat for dinner. The episode also depicts Curtis struggling to terminate his unintentionally revived relationship with Sam, but he fails to do so, since seeing her in misery invokes in him feelings of regret, triggering another time reversal.

After various erased attempts, Curtis finally manages to break up with Sam, subsequently explaining the situation to Alisha and further strengthening their relationship. At the conclusion of the episode, Sally discovers a video on Simon's phone, showing Nathan referencing the Misfits' role in Tony's death. Alone with Sally in the centre, Simon rejects her insistence that he inform against the other Misfits, since he considers them to be 'his only friends'. Simon fights Sally for possession of the phone, only for her to be accidentally killed when he throws her against a door.

Retrieved from "https://e4-misfits.fandom.com/wiki/Episode_5_(Series_1)?oldid=30150"
Community content is available under CC-BY-SA unless otherwise noted.