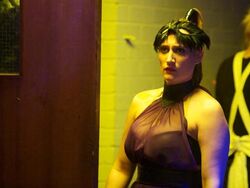 The episode primarily focuses on Kelly Bailey and her new relationship with the sweet and mysterious Bruno.

Nathan accidentally walks in on a girl changing in the locker room, offending her in the process. Suddenly, the lights go out and Nathan is brutally beaten to death. Alisha begins stalking Simon, and the two of them accompany each other on the walk to the community centre. When they arrive, they find Nathan slumped against the wall. He tells them he was killed the previous night, and suspects that it was the girl from the locker room. The girl, named Jessica is revealed to be a charity worker helping out at the community centre. Jessica and Simon begin flirting with each other, while Nathan tells the others to keep a close eye on her. While Kelly is shifting boxes, a man runs into hallway in a rush. She hears him thinking that she is attractive, but then a police man enters in pursuit and the man hides. The officer questions Kelly on the man's whereabouts, but she covers for him and the officer leaves. Up on the roof, the gang warn Simon about Jessica, but he refuses to believe the story and asks her out on a date, which she accepts. Kelly runs into the fugitive she met earlier, and he says his name is Bruno.

He offers her a beer to say thanks for helping him, and admits he was involved in a fight, which is why the police are after him. Nathan is in the office, watching with intrigue as Jessica rebuffs the advances of another boy, then runs off. The boy chases after her and Nathan follows, hoping to learn more about his own murder. However, Nathan is shocked when he discovers the boy dead. Convinced Jessica is responsible, Nathan calls everyone to tell them, but only gets through to Alisha. Nathan and Alisha tail Simon on his date with Jessica and spot them kissing. Simon catches them spying on him, and agrees to hear them out. Meanwhile, Bruno brings Kelly to the flat he is squatting in, and they have rough sex. Nikki and Curtis also have sex. Nathan, Alisha and Simon return to the community centre and find the boy's body missing. They conclude Jessica must have hidden it, but Simon again refuses to believe them and tells Nathan to stay away from Jessica. Simon is later handing out flyers when Jessica invites him to a fancy dress party. Simon invites the gang, and Nathan says they can use the opportunity to expose the killer. Kelly and Bruno meet up again in the storage room, where they begin to have sex again, but Bruno is too rough with her and she orders him to leave her alone. Simon and Jessica kiss in the locker room. She tries to tell him something but they're interrupted by her dad, who is visibly disappointed, but shakes hands with Simon for his daughter's sake. The police find Bruno's squat, and find his fancy dress party ticket.

Later, at the party, the gang begin their prowl for the killer, while Jessica's dad watches Simon, and his eyes are bloodshot. He is soon revealed as the killer when he mistakes Simon for a boy in a matching outfit and stabs him to death. Kelly and Bruno bump into each other again, he is dressed as a gorilla, and she allows him to explain himself. Curtis checks the roof and realizes it is the scene from his premonition in Episode 2. He is met by Nikki, who unexpectedly teleports there, and they have sex. Simon and Jessica lose their virginities to each other, which was what Jessica had earlier tried to tell him. Alisha heads up to roof and catches Curtis and Nikki having sex, but she is disappointed that he isn't helping them on the lookout, and leaves them too it. Bruno implies that he was affected by the storm, but the police soon gatecrash the party and they flee, Nathan follows. Alisha discovers the body of the boy Jessica's dad killed, hidden away away in a cupboard.

Worried, she starts looking for Simon, but Jessica's dad finds him first. He is about to kill him, but Alisha saves his life by knocking Jessica's dad unconcious with a fire extinguisher. Still running from the police, Bruno scales a building with Kelly on his back, but they are cornered by the police on the roof. Bruno is shot, and Kelly removes his mask to find that he is in fact a gorilla, who was changed into a human by the storm. The next day, Nathan comforts Kelly over the night before, and Alisha tells Curtis they are still friends. Simon tells the group about Jessica's dad, who has since been arrested, and also about him and Jessica. Nathan is happy for Simon, while Alisha looks jealous. Nonetheless, Nathan calls for a celebration, and the five of them have a drink on the roof.

Retrieved from "https://e4-misfits.fandom.com/wiki/Episode_5_(Series_2)?oldid=30201"
Community content is available under CC-BY-SA unless otherwise noted.