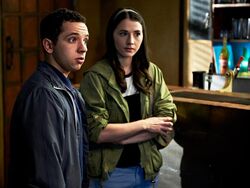 Finn finally tracks down his real father, only to discover that he's close to death. As he tries to build a relationship with him, Finn realises that his newly discovered half-sister might know more about their father's illness than she's letting on... Also, Finn continues his sleuthing in an attempt to win Jess' affection by discovering Alex's hidden secret.

Retrieved from "https://e4-misfits.fandom.com/wiki/Episode_5_(Series_4)?oldid=30403"
Community content is available under CC-BY-SA unless otherwise noted.