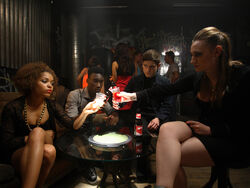 Episode 6 is the sixth episode of Misfits and the final episode of Series 1.

The gang notice that there's something strange going on in the town; local teenagers have stopped getting drunk, taking drugs, or having sex etc. And it looks like it's all down to a cult-like organisation called 'Virtue', run by Rachel, a mysterious girl with a commanding storm-based power of suggestion.

As the group investigate they discover Virtue may not be quite as pure as made out, when they witness Alisha and Curtis go through drastic personality changes. Nathan, Kelly and Simon are prompted to take action, donning rubber gloves to protect them from Alisha's touch and iPods to protect them from Rachel's power of suggestion. Kelly is unfortunately captured trying to convince Alisha that she has been brainwashed. Nathan and Simon are then cornered by Virtue members where Simon, frustrated by Nathan's ongoing lack of appreciation, leaves Nathan to contend alone as he makes himself invisible.

Nathan is saved by 'Super Hoodie', an enigmatic figure on a bike in an orange hoodie who creates a distraction and peddles both from danger. Subsequently confronting Kelly in her flat, Nathan is shaken to find she that has been affected by Virtue, informing her he preferred her old attitude. Stirred to act, apologising for leaving, he departs after giving her a kiss on the cheek.

Then, disguising himself in a suit to appear "virtueised", he infiltrates the community centre—the new headquarters of the Virtue organisation—and confronts Rachel. Armed with a gun and an iPod booming in his ears, he unsuccessfully attempts to force her to change the others back. Soon surrounded and threatened by her followers, he takes her hostage and retreats to the roof. There he makes an impassioned speech to the entire Virtue organisation, declaring the benefits of individuality. But when Rachel sees his gun is only a water-pistol, they struggle and she falls from the building. Her death lifts her influence over everyone. As Nathan stumbles at the edge of the roof, Simon reappears and manages to catch his hand, but loses his grip due to water from the gun as Nathan pleads 'save me Barry'.

Nathan falls and is killed, impaled on the iron fence below. After his funeral the other Misfits visit the club for a toast in his honour, but Kelly and Simon leave early. Simon gives Kelly a DVD of Nathan's exploits he recorded on his phone, which she tearfully watches in her apartment. The episode ends with Nathan regaining consciousness in his coffin, his joy at discovering his power is immortality fading as he realises that he is buried alive with only an iPod Kelly placed in his hand before burial.