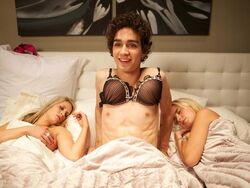 In a montage of the storm a young man (Brian) who works with and drinks milk is hit by lightning and develops the power to control dairy products. He records himself and reveals his power, hoping to impress a girl he likes. This starts a chain which eventually alerts the press to the powers. The misfits discuss whether to reveal their powers, with all but Simon eventually agreeing to it. Their probation worker hears them discussing it and tells the press and they are suddenly faced with their potential fame. Simon suggests hiding when a manager for the milk boy arrives and offers to represent them and gain them money. Simon walks out but the rest of the group are convinced when she agrees to cover up the people they've killed.

They are dubbed the ASBO 5 and Laura, their manager, briefs them on their new found fame. Nathan is in his element, sleeping with a number of drunken groupies. Simon arrives and reveals that his family didn't react well to his power and Nathan agrees to let him stay with him. At a meeting between the people with powers and potential sponsors the group mingle. Alisha tells Nikki to treat Curtis well; the group see Daisy, a woman who has the power to heal; Nathan agrees to kill himself live on TV; and Brian cannot hide his growing resentment at being pushed aside for new powers. When his girlfriend, his long time crush, leaves him he uses his power to kill her by choking her with her digested dairy products. He sets his sights on Daisy.

Nathan is visiting her while trying to convince her to fix an STD he has contracted. She refuses and just as Nathan tries to trick her Brian kills her from out of sight and she falls on her humanitarian award, impaling herself. Laura finds them and Nathan implicates himself, however the death is ruled an accident. Alisha visits Nathan while Simon is invisible and quotes him. However Simon has never said the quote and so he follows her to Superhoodie's den. When he arrives he makes himself visible and Alisha reveals the truth to him. He is confused but she agrees to help him. Laura fires Brian and he kills her. This starts off a rampage: while Nathan is killing himself on TV he kidnaps Alisha and Kelly and texts Simon to get him to help them.

Nikki teleports to the hotel accidentally and so Curtis and Simon go to the hotel. Nathan sees Kelly and she reveals he is seeing her ghost. He decides to go to the hotel but Brian finds him and uses the mozzarella Nathan had consumed to wrap around his cortex to give him permanent brain damage. Simon finds him and then finds Nikki, Alisha and Kelly's bodies, while Curtis stumbles upon Laura's. Simon holds Alisha in his arms and it is implied that this is the turning point which makes him become Superhoodie. Brian meets Curtis who reveals he is lactose intolerant as Brian attempts to destroy him via dairy. Brian takes out a knife and tries to stab him but it injures an invisible Simon instead. He tells Curtis, before he dies, that everyone is dead and that he must rewind time. He does so and they visit Brian before he is famous, punching him and effectively stopping their deaths. The group then discuss the end of their community service and agree to go for a drink.

Retrieved from "https://e4-misfits.fandom.com/wiki/Episode_6_(Series_2)?oldid=30222"
Community content is available under CC-BY-SA unless otherwise noted.