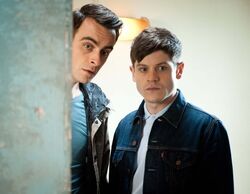 The episode primarily focuses on Rudy Wade and on his intimacy issues.

After a drunken one-night-stand with a mysterious girl Rudy discovers that he has a strange superpower STD. With only 24 hours to undo the curse, Rudy enlists Simon to help him find the girl. Meanwhile, something weird is happening with Curtis' gender-swap power. And Seth finally finds the superpower that he's been searching for.

Retrieved from "https://e4-misfits.fandom.com/wiki/Episode_6_(Series_3)?oldid=30292"
Community content is available under CC-BY-SA unless otherwise noted.