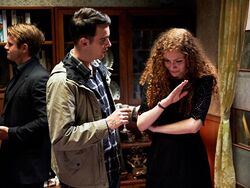 Episode 6 is the sixth episode of Series 4 and the 27th episode of Misfits overall. It marked the introduction of Nadine, who would become a love interest for Rudy, and Abbey, who would later join The Misfits Gang.

The gang go to a wild house party hosted by Rudy's oldest friend Richard Saunders, where they are stalked by a mysterious killer rabbit. While tracking it down, Rudy meets the enigmatic Nadine and finds himself head over heels for the first time in his life. By the time the night has drawn to a close, Alex has finally revealed to Jess the secret he has been trying to hide - but will their relationship survive his shock revelation?

Retrieved from "https://e4-misfits.fandom.com/wiki/Episode_6_(Series_4)?oldid=30423"
Community content is available under CC-BY-SA unless otherwise noted.