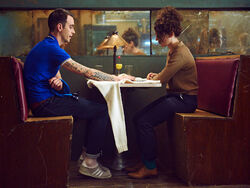 As part of their community service, the gang have to look after a group of terminally ill patients. However, one of the patients seems intent on cheating death.

A mysterious gypsy casts a spell on Alex after he refuses to help a damsel in distress, and Rudy's alter ego takes another step closer to finding the missing superhero depicted on the woolly jumper.

All members of the Misfits Gang are told to spend some time with terminally ill patients at the Community Centre by Karen, one of the patients' care assistants. Before doing so the Misfits get sidetracked and Alex, Finn and Rudy start discussing what to have for their 'last dinner', interrupting Karen in the process. Karen then backs up against the wall and blends in. The Gang believe Karen had walked off, Finn mentioning her apparent rudeness. Finn starts playing chess with one of the patients, Ben. Finn gets checkmated and insults Ben, as a joke. Rudy plays chess with Lucas, a victim of skin cancer. Lucas starts talking about how he doesn't deserve cancer, and how he should be hanging out with mates. Jess and Rudy sneak off to have sex, but Rudy fails to get an erection and leaves. Finn walks out of the Community Centre and sees Ben. After talking Ben reveals he hasn't got cancer and is pretending so he can hook up with girls.

Later Alex shows off his new jeans, when Finn asks him for £20. Alex refuses and leaves, just as Abbey takes Mark to the cinema. Alex encounters a woman named Hayley who dropped her keys in the lake. She asks Alex for help but he claims he doesn't want to ruin his jeans, leaving her to go in herself. Ben is at the Community Centre's toilets and finds Lucas at the sink. Lucas asks him what should he do if he could prevent his cancer. Ben replies that he tries no matter what. Lucas hugs Ben and uses his Life Absorption power on him, delaying his cancer. Finn attempts to hit on a girl in the bar by claiming he has cancer. It backfires when he says he has AIDs. Hayley walks in, soaking wet, saying how she almost drowned. She then curses Alex, so every time he doesn't help someone he feels like he's drowning. She shows this when she asks for him to drive her back to her house, he refuses and vomits. Finn takes advantage of this and asks him for £20, which he refuses. Jess and Rudy attempt to have sex again but the same problem happens.

Later on Finn plays chess with Ben, who seems disturbed. Ben plays poorly, gets checkmated and Finn insults him as a joke.

Retrieved from "https://e4-misfits.fandom.com/wiki/Episode_6_(Series_5)?oldid=30609"
Community content is available under CC-BY-SA unless otherwise noted.