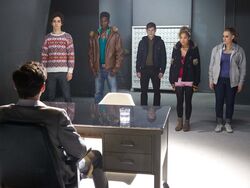 Episode 7, also known as the Christmas Special or Xmas Special, is considered to be the seventh and final episode of Series 2 and the thirteenth episode of Misfits overall.

The special starts three months after the previous episode showing us what the Misfits have been up to since they finished their community service. Kelly works for the council cleaning bins, Nathan dresses up as Santa and gives out leaflets, Simon is practicing parkour after learning that he is Superhoodie and Alisha and Curtis are working as bartenders on the estate.

It's just one week before Christmas and gang are trying to settle into normal lifestyles. Kelly still picks up litter, Alisha and Curtis are working in a bar and Nathan works as a Santa Claus and hands out advertisements. Simon and Alisha are an item, and he is aware of his future self. They live together in his underground lair and he practices his parkour skills. Alisha is out and notices a poster that advertises "Cash Paid For Powers". At the community centre, a disillusioned vicar named Elliot waits alone as no visitors turn up for his preaching session, so he leaves and loses his faith in God. The gang meet up at the bar where Curtis and Alisha work, and Simon tends to his injuries sustained from his parkour. An embarrassed Nikki returns after having earlier teleported away by accident while she was having sex with Curtis. Nathan goes to the community centre and meets a pregnant girl named Marnie. They bond instantly and have sex in the locker room. Following up on the poster she saw, Alisha meets Seth, a man who has the ability to remove and harness powers, although he cannot use them himself. Seth buys powers, and deals them out to anybody who can afford them.

Desperate to be rid of it, Alisha lets Seth take her power for free. Alisha leaves and heads back to Simon, while Elliot the vicar arrives at Seth's, and buys some powers from him. Simon is shocked when Alisha touches him to no effect, but they have sex and Simon feels inadequate when he cannot perform like his future self. Alisha understands, but Simon believes she will always love his future self more than him. The next day, Nathan tells Marnie he wishes to be there for her and the baby. Elliot is out on the estate, and stuns onlookers when he walks on water. He tells everyone that he is Jesus Christ, having risen again.

Simon visits Nathan for some sex advice, also telling him how Alisha sold her power. This prompts Nathan to visit Seth and sell his immortality, for which he gets £2,000 and gives it to Marnie. Elliot is preaching outside to his followers, when a robber; Luke, tries to steal the donation box. Elliot uses magnetism to levitate the gun away from Luke, who in turn agrees to worship him. At the bar, Alisha tells Curtis, Nikki and Kelly about Seth, and they all happily sell their powers for £20,000 each. Simon is at first reluctant, but Alisha, wishing for them to be a normal couple, convinces him by lying that his future self told her they should sell them. Later on, Alisha and Simon have sex again, but this time he is better, Curtis and Nikki buy tickets for a holiday and Elliot continues to buy powers from Seth, using the money he has conned out of his followers. In the morning, Marnie and Nathan are awoken to the sound of singing, by Elliot and his followers.

Luke returns to him with a container of coins, but Elliot orders Luke to go out and steal all the money he can. Luke goes to the bar, and forces the gang to hand over the money. Nikki is accidentally shot and killed during the ordeal. Her death makes the gang realize how important their powers are to them, so they go back to Seth and demand them back. Seth tells Curtis his power was sold, but the others must each pay £40,000. After threatening Seth, they are kicked out. The next day, Alisha is out walking when Elliot catches up to her. He reveals that he has Alisha's power and uses it on her. Fortunately, Luke arrives to tell Elliot how he killed Nikki, and Alisha manages to run away. She admits to Simon that she lied to him, but he forgives her.

When she tells him about Elliot, Simon leaves intent on killing him. The gang find Elliot by his locker in the community centre, but he uses Nikki's power to teleport away when they try to attack him. The gang then take his locker, filled with money, in order to buy back their own powers. Elliot attempts to stop them, and uses telekenisis to pull the locker away, but it instead darts toward him and hits him in the head, killing him. Shortly after, Marnie enters labour and gives birth in the community centre. Finally, with the locker full of money, the gang revisit Seth, who tells them that they can choose whatever powers he has left. Kelly volunteers to go first, and the series ends as Seth gives her a power.

Retrieved from "https://e4-misfits.fandom.com/wiki/Episode_7_(Series_2)?oldid=31107"
Community content is available under CC-BY-SA unless otherwise noted.