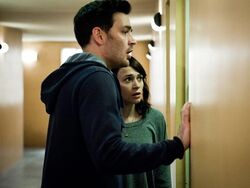 The episode primarily focuses on Seth and on his relationships with Kelly Bailey and his ex-girlfriend, Shannon.

When Seth finds a resurrection super power he uses it to bring his dead ex-girlfriend, Shannon back to life. But it's not long before he realises that the new power has unexpected consequences when Shannon develops a taste for blood. Seth is torn between his love for Kelly and the guilt he feels over Shannon's death, as the gang battle an army of zombie cheerleaders.

Seth and Curtis arrive at the graveyard, after exhuming Shannon's body, Curtis uses his new power to bring her back to life.

Sometime later, Seth prepares Shannon a meal but she states she's not hungry and that she feels different, Seth dismisses this as natural for someone who's been dead for months.

The next day Curtis finds Maggie holding the limp body of her cat Mr. Miggles who had been hit by a car. Claiming to be a trainee vet, he once again uses his power to resurrect Mr Miggles; a delighted Maggie offers him a Victoria sponge, but insists he return the tin.  Meanwhile at the Community Centre, a group of cheerleaders are practising a dance routine, much to the horror of Rudy. He later explains that he'd once witnessed his parents having sex, with his mum wearing a cheerleader's costume.

Seth meets Kelly and breaks up with her, explaining that Shannon was back, though he doesn't explain that Curtis was responsible. Kelly is left furious at the news.

When Curtis returns to Maggie's place, he finds the door ajar, with Maggie dead on the floor. Mr Miggles ferociously attacks Curtis who locks himself in the bathroom and calls the others for help. When they arrive they manage to subdue the savage cat, only to be attacked by Maggie, who has apparently returned as a zombie. Rudy manages to kill her with a hammer, but nobody is prepared to kill the cat, forcing them to take him, in a cage, to the Community Centre with them.

Realising the extremely dangerous and infectous side-effect on Curtis's power, Kelly goes to warn Seth about the danger Shannon poses, but he refuses to listen. The gang attempt to break into Seth's flat to kill Shannon but the couple hide at Jack's; in a moment of weakness Jack tries to feed on Seth, but Shannon kils him with an iron. She later explains everything to Seth, who tries to satisfy her appetite by buying her pets to feed on. While she sleeps, Seth contemplates killing her, but cannot bring himself to do it.

Back at the Community Centre, it's discovered that Mr Miggles has escaped from his cage and has infected the cheerleaders who all quickly succumb to the infection.  Kelly, Simon, Alisha, Curtis and Rudy are forced to confront and kill the cheerleaders to prevent the zombie infection from spreading further.  Seth arrives looking for help killing Shannon and aids the Misfits in killing the cheerleaders.

In the midst of the carnage, a new probation worker arrives to replace Shaun, but she is immediately bitten by a zombie cheerleader; after returning to life, an apologetic Rudy tells her she was "in the wrong place, at the wrong time" before killing her too.

Shannon appears at the Community Centre and corners Kelly, realising that Seth doesn't want her anymore, she plans to go bite Kelly too, at the last moment, Seth kills her with a shovel, saving Kelly. The two reconcile as Kelly admits "I fookin' luv ya".

The Misfits quietly celebrate preventing a zombie apocalypse, before they suddenly remember Mr Miggles is still at large and run to kill him.

Retrieved from "https://e4-misfits.fandom.com/wiki/Episode_7_(Series_3)?oldid=30304"
Community content is available under CC-BY-SA unless otherwise noted.