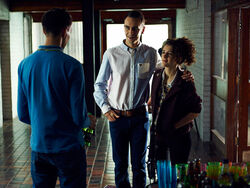 Episode 7 is the seventh episode of Series 5 and the 36th and penultimate episode of Misfits overall.

There's a big party at the community centre to mark the first anniversary of the storm, which is also the first birthday party of two characters created by the storm, Rudy Two and Abbey. Alex falls for Sarah, who has a mysterious power that is making her life a misery.

Whilst working at the bar, Alex is approached by a girl named Sarah who unwittingly hypnotizes everybody in the bar, including Alex, with her unwanted power - that of Hypnotic Breasts. Alex and Sarah have sex in the toilets to remove her power, and upon losing her power, the spell is broken and Alex sees her face for the first time. Evidently attracted to her, Alex tries to make conversation, but Sarah isn't interested and leaves. Alex then resolves to tracking her down at her flat to start something serious, but again she knocks him back.

With the end of the Community service for the The Misfits Gang approaching, and with it also being the impending first year anniversary of The Storm, Abbey (for who it is also her first birthday party) organizes a party at the Community Centre to celebrate. Their probation worker, Greg, invites himself. Rudy Two also decides to bring along to the party members of the Power Support Group whom he has befriended, including Tim, Stuart, Mark, Maggie and the "superhero team" he is putting together, the Jumper Posse.

Rudy instantly takes a disliking to his doppelganger's lover Helen, since he is scared that she will take Rudy Two away from him. Greg takes an ecstasy pill, and begins dancing happily with another gay probation worker Stuart. Abbey learns that drugs can reverse powers, and so gives an ecstasy pill to her turtle lover Mark which finally turns him back into a human. Sarah turns up at the party to see Alex, they start dancing and have sex in the storeroom.

However, Alex has also taken a pill, and unknowing about power reversal, his power has actually been turned into Power Bestowal. This causes Sarah to be given back her Hypnotic Breasts, as well as all the powers Alex had previously taken from others, including Satanic Conversion, Object Inversion, and Accident Causation. Sarah's mind is turned evil by the Satanic power, and she begins to try to convert and/or kill anybody separated from the main group. She converts Rudy, Finn, Jess and Abbey, and also kills the newly-human Mark with Object Inversion. However, Alex kills Sarah by manipulating her Accident Causation, releasing everybody from her spells.

Tim is lost to the Game World one final time, seeing Rudy Two and Helen as his enemies "Conti" and former girlfriend "Roxxy". Tim is about to shoot them dead, but they are saved by a camouflaged Karen who has been watching events unfold and stabs Tim to death. Rudy Two, Helen, Karen, and Sam bury Tim's body under the overpass, and Rudy Two comforts them that it was necessary since Tim was out-of-control, and it is the first step in them becoming the superheroes depicted on Maggie's Jumpers.

Atop the community centre, Rudy and Jess argue regarding Maggie's Jumpers, since in the final one Jess is depicted holding a baby. Rudy panics, claiming he wants nothing to do with any baby, to which Jess calls him a coward and breaks up with him.

Retrieved from "https://e4-misfits.fandom.com/wiki/Episode_7_(Series_5)?oldid=30666"
Community content is available under CC-BY-SA unless otherwise noted.