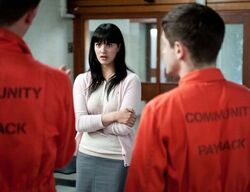 Episode 8 is the eighth and final episode of Series 3 and the 21st episode of Misfits overall. It marked the death of Alisha and the final appearance of Simon and Kelly.

The episode primarily focuses on Simon Bellamy and his fast-approaching destiny as the guy in the mask.

The gang are freaked out when they find themselves face-to-face with Tony and Sally, after a fake medium with a superpower brings familiar faces from their past back to life. It soon becomes clear that these people have come back from the dead with dark and dangerous motives, and the very heart of the gang is threatened as Simon realises that his Superhoodie destiny is fast approaching.

The episode begins in the Community Centre, where a medium is performing a seance. The medium delivers a message to Simon, who is casually passing the room, saying that Sally "wants to know why." This startles Simon, who quickly leaves and informs the others, unaware that Sally is watching them from close by. Some time later, Kelly visits Seth, who has just finished dealing with a client, selling him the power to caffeinate drinks . The two argue over his business scheme, causing Kelly to walk out.

Simon, back at his flat, experiences a vision of him kissing Sally, until he is interrupted by Alisha. He reassures her that he will never hurt her. Later, the gang encounter Rudy banging the vending machine with a fire extinguisher, but to no avail. In the bathroom, Simon encounters Sally in person, much to his surprise. He asks why she is there, to which she explains that the medium brought her back, and admits that how she acted was wrong, and assumes she's there for him. She soon discovers that Simon is in a relationship with Alisha, but begs him not to tell the others that she has returned.

Outside, the gang encounter the medium and confront him, prompting him to admit that he was caught in the storm, and that he used to be a fraud. He explains that his power enables the deceased to return briefly to carry out any unfinished business. He performs another reading for the gang, this time bringing back Rachel, the founder of Virtue. The medium takes his leave, leaving the gang to epxlain why she is back. Rachel reveals that there is no God, much to her disappointment the fact that she tried to live a pure life. The gang encourage Rachel to start living wildly while she is back, to which she accepts.

Outside, Kelly sees Seth waiting for her, who claims to have something to show her. He takes her back to his office, where he reveals that he is done with dealing powers and has got rid of his desk. The two reconcile and agree to a holiday. Meanwhile, Simon sees a note from Sally to meet her in the old storeroom.(and bring some chocolate).As Kelly is leaving, she sees Tony waiting for her, and he begins to chase her. Rachel is enjoying vodka for the first time when she drunkenly starts coming on to Curtis in front of Alisha and Rudy. Before she can climax, however, Kelly interrupts them to announce Tony's return. Tony breaks in but quickly explains that he's not there to hurt them. They reveal that Sally is also back, but Tony was unaware that Sally died to begin with, which enrages Tony.

Tony searches for Sally, who is in the storeroom with Simon. The two start reminiscing, upon which Sally notices that Simon has become a more confident person, much to her relief. He explains that he no longer has invisibility before the two head off for wine. Tony, in his search for Sally, walks in on Curtis and Rachel having sex. Meanwhile, Simon takes Sally back to his flat, upon which she expresses her true feelings for him. Simon tells her that he earlier had a vision of them kissing, to which Sally offers to fulfil it. However, Simon is reluctant to betray Alisha, to which Sally reminds him that he killed her before they begin kissing; as they are getting passionate, Simon is unaware that Sally is recording everything on his phone. Shortly after, Sally abruptly leaves.

Rudy, meanwhile, is teaching Rachel to smoke at the community centre. The gang decide to fill Tony in when he asks about Sally's replacement. Tony is disgusted with the group's overall behaviour, to which Alisha stands up for them by explaning how they've done nothing but stand up for themselves. Sally then sends Alisha the video of her and Simon kissing, to which she watches in shock. She confronts Simon in the locker room and breaks up with him. Simon encounters Tony as he tries to chase after her, while Sally follows Alisha onto the roof of the community centre. She plans to throw Alisha over the edge when Tony and the gang stop her. Tony explains that the storm affected him too, and explains that they're back to be reunited with each other. The two embrace and kiss, while the gang watch dumbfounded when they disappear.

Simon tries to explain to Alisha why he kissed Sally, and Alisha forgives him leading him into the locker room. Rudy sees Rachel crying over the way she's behaved, and that she feels dirty. Rudy tells her about Sally and Tony moving on, to which she misunderstands that her unfinished business is revenge. Simon and Alisha are then seen having sex in the toilets. Just as Simon and Alisha emerge from the locker room, Rachel swings her arm and slits Alisha's throat before disappearing. Despite their efforts, Alisha dies while lying in Simon's arms.

Curtis offers to resurrect her, but the group disapprove. Simon then realises he must face his destiny, and finally reveals to the group that he is, in fact, Superhoodie. Kelly calls Seth to the community centre, where Simon asks him for Curtis' old power. Seth warns him that there is no turning back, to which he accepts. Meanwhile, Kelly confronts a man at the bar who already purchased the power to time travel, and begins flirting with him. She leads him back to Seth's office, where Seth takes his power from him. Just before he goes back in time, Seth remembers Simon as the first person he dealt a power to. The group decide to bury Alisha in the woods. As Simon leaves his flat for the final time, wearing an orange hoodie, he says goodbye to the group before travelling back. He arrives at a point where the original five Misfits (including Nathan) are having a group conversation on the benches (Episode 6 (Season 1)).

Simon then investigates his apartment - which has been completely abandoned and in major need of building work. Simon visits Seth at his store and buys the power of immunity towards other powers for £10,000. Meanwhile, Curtis, Kelly, Rudy and the other Rudy talk about how Simon and Alisha will forever be trapped in a cycle. The three agree to keep their heads down and resume their community service.

Retrieved from "https://e4-misfits.fandom.com/wiki/Episode_8_(Series_3)?oldid=31028"
Community content is available under CC-BY-SA unless otherwise noted.