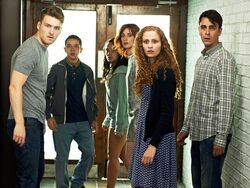 Rudy's passion for Nadine is put to the test when he tries to persuade her that they have a future together. Suspecting that she is keeping something from him, he finally discovers her secret, and the truth takes on biblical proportions when the gang discover her super-power.

Rudy visits Nadine at her convent to return her handbag which she left behind, but is told that they are no longer able to see each other. Rudy begins praying to have Nadine back. Meanwhile, Jess finds out that Alex is cheating on her and she breaks up with him immediately. She returns to the community centre where she finds out Finn has just had sex with Abbey as a "tester" for her to see if it felt right. Nadine visits Rudy, and after several nun jokes Rudy leaves for the bathroom ecstatic that he is getting on so well with her. The nuns kidnap Nadine and take her back to their convent, locking her up so she cannot escape. Rudy gets out of community service to save Nadine with Greg's sentimental encouragement, but cannot get into the building. He returns later with Jess, Finn and Abbey and they manage to break in and rescue Nadine. Once back at the community centre, Alex turns up to apologise to Jess but gets into a fight with Finn. With so much anger in the atmosphere, Nadine's power is activated and it is revealed that she unconsciously summons the Four Horsemen of the Apocalypse when she is surrounded by discord. The six of them walk outside but are confronted by the Four Horsemen at the top of a hill with bicycles and swords, and they are quickly chased back inside. The ensuing battle has Finn finally use his power successfully to save Abbey's life, Alex stabbed in the chest, and Nadine sacrificing herself to make the Horsemen disappear for good. After the final battle, Rudy is still recovering emotionally from Nadine's death and upon hearing that Alex requires a lung transplant he is reminded of Curtis' story of Nikki from Series 2 who got a power through an organ transplant. The series ends on a cliff hanger as Alex is seen in operation about to receive the donated lung.

Retrieved from "https://e4-misfits.fandom.com/wiki/Episode_8_(Series_4)?oldid=30500"
Community content is available under CC-BY-SA unless otherwise noted.