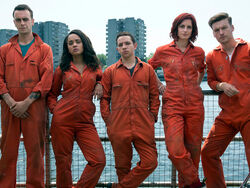 Episode 8 is the eighth episode of Series 5 and the 37th episode of Misfits overall. With Misfits not getting renewed for a sixth series, it is also the final ever episode of the show.

The episode largely takes place in an alternate timeline in which the Jumper Posse have become villains in conflict with the Misfits Gang. A second storm brews at the end of the episode, suggesting the gang might get new powers.

In the final episode, the gang contemplate life after community service. Still upset with Rudy, Jess seeks comfort elsewhere, and the woolly jumper superheroes surprise everyone.

The final episode begins with the gang (Rudy, Jess, Finn, Alex and Abbey) outside the community centre being told by their probation worker Greg that it is the last day of their community service, and that they have achieved nothing.

Afterwards, they all decide to go for a drink at the bar. Rudy attempts to apologise to Jess for saying he wanted nothing to do with Jess' future baby (which had been depicted on Maggie's Jumpers), but Jess refuses his apology and the two remain separated.

An upset Jess then meets new guy Luke at the jukebox, they begin drinking together and finally go back to his for a one-night-stand. When Jess tries to awkwardly leave in the morning, Luke refuses to let her go, instead using his power to take Jess forward in time one year. In this timeline, Jess is living with Luke, and has a baby son, Leo, with her captor. However, Jess does not remember being pregnant, giving birth or moving in with Luke; only moments have passed for her. Luke implies that he has used his power on girls before in the same way to get them to fall in love with him, but it has not worked. Luke then goes to his job and leaves Jess at the flat to get acquainted with her new baby. Panicking, Jess tries to ring the phones of the others, but the numbers are no longer in use.

Jess takes the baby out in the pram and goes to the community centre to look for familiar faces, where she finds two unnamed new guys on community service, and no sight of the others. Electric girl Helen, flyer Sam and chameleonic Karen are also there, pretending to be on community service as part of their alter egos to their "real superhero group", the Jumper Posse, as begun by their mentor Rudy Two.

Jess enters the building to find Finn working as a trainee probation worker under Greg, and Finn explains to Jess that for everybody else, a whole year has passed. For them, she simply disappeared after an argument with Rudy, and everybody had assumed that Jess had either ran away or was dead, after trying to find her for some time. Finn organizes a reunion at the bar where Alex is still begrudgingly working, and where Abbey is moaning about working for con artists. Jess' reappearance has taken a very heavy toll on Rudy, who hasn't shaved or had a haircut since Jess went missing and Rudy Two took off to mentor the Jumper Posse. After getting over the shock, Rudy cleans himself up and tells Jess that he will be there for her again and the baby, even if it isn't his baby, to try and make up for before.

Meanwhile, Rudy Two discovers that his idea for forming a band of real superheroes hasn't turned out very well. The Jumper Posse have been active for a year, starting with the killing of Tim, and have since virtually removed crime and gangs from Wertham, but in the process they have become cold-hearted vigilante killers. Rudy Two's girlfriend Helen, along with Sam and Karen, have gone from shocking car thieves to brutally and senselessly murdering people for minor things such as littering. Under the overpass, where the Misfits Gang buried a dozen or so bodies (people killed in self defense), has been filled with many hundreds more bodies due to the over-kill activities of the Jumper Posse.

When Finn discovers that the Jumper Posse aren't really on community service and threatens to expose them, Helen shocks him unconscious, and along with Sam and Karen they decide to bury Finn alive under the overpass. However, Rudy Two steals the car with Finn in the boot and gets away to take Finn back to the Misfits Gang. Sam flies after him and lands on the front of the car, and begs for Rudy Two's acceptance of what they have been doing, but Rudy Two tells him no, beginning conflict between the Misfits Gang and the Jumper Posse.

Sam attempts to kill them by picking them up, flying away and dropping them from a height. At Finn's goading, Alex manages to grab onto Sam and, mid-flight, he pulls off Sam's orange jumpsuit and anally rapes him. This takes away Sam's power, and whilst Sam falls to a very bloody death, Alex is safely caught in a wheelie bin that is moved into position by Finn's Telekinesis which he has finally mastered. Entering the building, they are slashed at by a hidden Karen. The infamous vending machine is finally demolished by Rudy, who thinks it is Karen. As Karen reveals herself to kill Alex, Finn throws a piano at her with his power, crashing through the probation worker's office and killing her. Finally Helen appears, and Rudy and Rudy Two join for the last time to defeat her. Using Rudy Two's tendency to wet himself and Rudy One's cunning, they cause a stream of urine to go to Helen which shocks her at the same time she shocks Rudy, killing all three of them. The gang then bury Rudy's body in the woods.

Jess goes back to the flat, puts the baby in its cot, goes to the bathroom and slits her wrists. When Luke comes home from work, he finds Jess' dead body, and in desperation takes them back in time to the point just before they met. Jess evidently retained some memory of the future and aided by a video message of her future self, she stabs Luke after having sex with him, but before he can trap her. She gets back with Rudy One and tells Rudy Two what will happen if he continues down the path of forming the Jumper Posse. With this knowledge, Rudy Two decides to disband the superhero group in its earliest stages, cancelling out the future in which they become villains and are killed. Rudy Two and Helen decide to go traveling the world together instead.

The rest of the Misfits Gang are also equally disappointed with their potential futures, and discuss becoming the real superheroes Rudy Two dreamed of and that the Jumper Posse should have been. In the final shot of the show, a second storm is seen brewing above Wertham, suggesting new Powers. Atop the community centre, Rudy, Jess, Finn, Alex and Abbey stand vigilant, once again wearing the orange overalls of community service.

"This could be the start of something huge. I can feel it in me nutsack."
— The final ever words spoken on the show, delivered by Rudy, as the gang debate whether or not to become real superheroes.

Retrieved from "https://e4-misfits.fandom.com/wiki/Episode_8_(Series_5)?oldid=30720"
Community content is available under CC-BY-SA unless otherwise noted.