For the baby with the power of Relationship Manipulation, see Finn (baby) 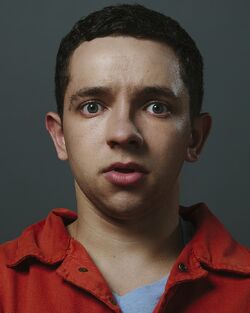 Finn is a member of the Misfits gang throughout Series 4 and 5. His power is Telekinesis and he is portrayed by Nathan McMullen.

Finn met Sadie when he was 16 and she was 15, and they've been together ever since. Finn stated that Sadie is the only girl he'd ever been with. Some time after, Sadie found a flat, furnished it and she and Finn moved in together. After the Storm hit, Finn received the power of Telekinesis and Sadie received the power of Mind Control . She used her new power to make Finn the perfect boyfriend, as he was childish and inconsiderate before. When Finn realized Sadie was controlling him, he tied her up to the bed and held her captive until he could "find a cure" for her.

During the first episode of Season 4, Finn mentioned his "dog" called Sadie.  When he heard that Rudy had someone locked up in an ice chest, he suggested that there may be a perfectly innocent reason for that. In the preview for the next episode, Sadie was revealed to be a blonde woman that Finn keeps tied up in his house.

In the second episode of Season 4, it was revealed that Sadie was actually Finn's girlfriend, who had the power to make him do whatever she wanted.  He said that she exploited this power to to make him into the perfect boyfriend, that he had to give her a never ending stream of presents and that his jaw was sore from hours and hours of talking about his feelings, not to mention the constant cunnilingus.  So, when he got free after she left for a week to go on a trip, he tied her up and gagged her.  She said that she only did it to make him better, to stop him from pissing into her potted trees (which he did three times), that the only time she made him give her a present was on her birthday and that otherwise he never cleaned.

She was released by Rudy two then runs off.  Finn was devastated and said that she was the only girl he could be with, the only girl he'd ever been with since 16. He found out the next day that she'd returned and he runs home to meet her.  Sadie told him that it was over, that it just wasn't working out, that he should just leave, since she'd found the flat, she'd paid the security, she'd paid the rent, and that he'd never contributed anything.  He responded that he'd contributed humour and that he was willing to change for her on his own.  She kept telling him that it was over and he kept apologizing and asking her to take him back, so finally she did, saying that she wouldn't use her power on him again, after which they had make-up sex.

Immediately after the sex, he threw her off, stepped out of bed and wiped himself off on her top, shrugging off her exclamation of anger at seeing him treat her clothes like that.  The next day he appears at the Centre, once again controlled by her.  Soon after, Jess brought Seth over to forcibly take Sadie's power and Sadie afterward kicked Finn out once again.  Finn then moved out of the flat, to live in the community centre with Rudy.

Finn went to his step mum Lisa's after she called to let him have her television. While there,Lisa reveals she fancies him and gives him oral sex. This angers Jess when she finds out, and she calls him a stepmotherfucker. Later when Lisa tells his dad Mike that she gave him oral he gets angry and tells Finn that he isn't his dad and he raised him knowing that he wasn't his own son. He then tells Finn that now he knows he can fuck off.

Finn later attempts to receive Jess's affection. However all his attempts fail. Due to Rudy bringing too many girls back to the community centre and sleeping with them while Finn is trying to sleep, he makes Rudy move out. When Rudy apologizes he and Finn make up and he moves back in. When the gang find out about Curtis being a zombie,Finn doesn't want to kill him and is upset. Curtis later commits suicide.

Finn decides to try to find his biological father which proved difficult due to his mother's philandering past. Finn eventually meets his father Dan and his half sister Grace. However, Dan is close to death due to cancer and Finn later finds out that Grace is keeping him alive but he isn't getting any better. Dan begs him to persuade Grace to let him die because she finally has someone there for her. Finn takes Grace out for drinks to do so but runs upon Alex talking to a man in a underground car park. Finn believes he is paying him for sex and it is now his chance to break Jess and Alex up. Finn films this and he shows Jess but she drops his phone in the toilet and her and Alex go back to Alex's flat. Finn and Grace later get kicked out of the bar after a fight and they draw on Rudy's face while he sleeps. When Finn wakes the next day Grace is gone and he realizes he never spoke to her about their dad. He rushes to his dad's house where Grace is about to revive him and Finn tells her not to and that she has him. Grace almost kills Finn while attempting to revive him without annoyance. Dan wakes and he tells them both it will be okay before he dies. Finn later tells Jess at the Community Centre and when Rudy hits on Grace he attacks Rudy and tells him to stay away from Grace, finally learning to stand up for himself.

Finn and the rest of the gang go to Richard Saunders wild house party. Finn becomes more jealous of Jess and Alex's relationship. At the party they are affected by a power where the number of the amount of people they have had sex with appears on their head. Finn's is 1, which is Sadie. Rudy encourages him to boost the numbers and Finn sleeps with Stephi, a blonde haired girl he meets at the funeral service located near the party. Stephi later denies it. The gang are attacked by a giant white rabbit wearing a suit with a golf club. They stumble upon Abbey while looking for it and she kills the rabbit.

Finn's attempts to impress Jess continue to fail and eventually Finn hangs up on Jess upon her asking for help with Alex. When he and Abbey need to steal a laptop for Tara's address, Finn poorly uses his telekinesis to spill the cup of tea over the lady with the laptop to get her out of the room. They later head for the karaoke club, where Finn stares in horror at the probation worker and Rudy singing.

In the series finale Finn walks into his room to find Rudy praying for Nadine and Finn tells him it might be best to move on. Later the next day at the bar Jess tells Finn how she thinks Abbey is a slut. Finn sticks up for Abbey, and leaves Jess on her own in the bar. Finn sees Alex flirting with a girl and tries to take action but is intimidated by Alex. Finn later returns to the Community Centre to see Rudy angry that Nadine has disappeared and he smashes Finns television, angering Finn. The gang later head to the convent to bust Nadine out. Finn uses his telekinesis to bust open the door and he struggles a lot to the point where blood came out of his ear. After saving Nadine, Finn and Abbey have sex with lack of emotion. When Jess comes to him for help after Alex cheated on her, Alex attempts to win her back. Finn pushes Alex but Alex hits him hard and he falls. Nadine identically summons the Four Horsemen of the Apocalypse. The gang run from them and one injures Finn with his sword. Finn runs through the Community Centre to see one about to kill Abbey. Finn uses his telekinesis perfectly and throws the horseman into the door. This action implies that Finn's power is much stronger than he thinks. Finn and Abbey find Nadine and Rudy and they stumble into Jess who is trying to help a seriously injured Alex. Finn, Jess, Rudy and Abbey prepare to sacrifice themselves for Nadine. Nadine can not let them die for her and she dies at the hands of the horsemen, who then disappear. Finn sits and watches Rudy cradle Nadine in tears. Finn and Rudy sit by Nadine's grave in the woods and bid farewell. The gang later ride around on the Horsemen's BMXs where they hear Alex is having a lung transplant, and then Rudy tells them about Curtis's story about Nikki's heart transplant and her receiving exportation.

Finn is somewhat childish, naive and has optimistic view of life. However, Finn is socially awkward, especially towards girls who he doesn't understand as well as Rudy does. Finn doesn't want to hurt or mistreat anyone so it takes a moment before he tries to refuse from something other people try to make him do.

Because of his naive personality, Rudy can easily convince Finn to follow his tips for gaining Jess' love, which always leads to the opposite desired effect. Finn has had feelings for Jess since they first met.

Finns' original ability is to move objects with the mind. This power can be activated through the hands and/or eyes. Finn struggles to effectively use the power due to trying too hard with it, which reflects how he tries too hard to impress people as a person. When using his power, Finn would point to the object (something mostly of a small size) and stare at it with deep concentration though would only result in minimal mobilization of the object after some time focusing on it. His mastery of his power is shown to be very minimal, but in times of emergency and desperation he uses it very effectively in an instinctive manner.

Finn was transferred the power to be possessed by the Devil by Keith, before his death. This allowed Finn to convert individuals to Satanism, transforming them into Agents of Satan. The power was removed from him when Alex had sex with him, activating his power of Power Removal.

Finn's brief power of Satanic Conversion.
Add a photo to this gallery

Retrieved from "https://e4-misfits.fandom.com/wiki/Finn?oldid=30975"
Community content is available under CC-BY-SA unless otherwise noted.