For the newest member of the Misfits gang, see Finn 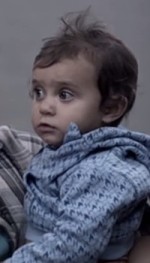 Finn is a nine month old baby with a single mother. He possesses the power to cause others to act like a father to him, possibly because he never knew his own. He used this power to manipulate Nathan, causing the other Misfits to panic when witnessing Nathan running away with him, but Kelly uses her power to read Finn's thoughts and they soon realise what is going on.

Finn soon rejects Nathan when it becomes clear he would be a bad father. When Kelly and Nathan return Finn to his mother, Kelly explains that he had escaped from the Community Centre and they were simply taking him back. Kelly also tells Finn's mother to take him to see his real dad, hoping the toddler's powers will convince him to give the dad another chance.

Retrieved from "https://e4-misfits.fandom.com/wiki/Finn_(baby)?oldid=30040"
Community content is available under CC-BY-SA unless otherwise noted.