Start a Wiki
Four Horsemen of the Apocalypse 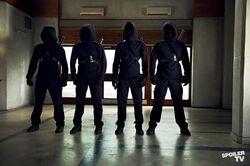 The Four Horsemen of the Apocalypse are deities summoned by Nadine's power. Upon seeing too much conflict and violence, Nadine's power is activated, summoning the Horsemen, as well as possibly the apocalypse.

The Horsemen were summoned in Episode 8 (Series 4) when Nadine witnessed Alex, Finn, Abby and Jess get into a fight in the Community Centre. Their only goal was to kill Nadine, and anyone who stood in their way. The gang attempt to run away, but end up running back to the Community Centre when they are confronted by the Horsemen (who are actually on BMXs, and possess samurai swords) on top of a hill. The Horsemen manage to break into the Centre, and the gang split up and hide from them.

Abby is almost stabbed by one when Finn quickly rescues her using his Telekinesis. Jess and Alex hide in the locker room when they are suddenly attacked by one, resulting in Alex getting stabbed through the torso. Jess repeatedly smashes the Horseman in the back of the head with a fire extinguisher, which seems to leave it unharmed, but it does not attack her.

All of the gang group up in the locker room around a dying Alex, and decide what to do next. Jess explains that the Horsemen are a result of Nadine's power, so if she dies, they will. Rudy objects against this, and suggests they go out there and fight them. Nadine is touched that they would all sacrifice themselves to save her, but she decides to sacrifice herself to save the others. She runs into the Community Centre's main hall, where the Horsemen are waiting, and is held down and executed by them, causing them to collapse and disappear in a black mist. This also (presumably) prevents the apocalypse.

Retrieved from "https://e4-misfits.fandom.com/wiki/Four_Horsemen_of_the_Apocalypse?oldid=28098"
Community content is available under CC-BY-SA unless otherwise noted.