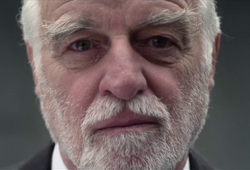 "I am going to travel through time and kill Adolf Hitler."
— Friedrich narrates over his letter as he prepares to travel back in time

Friedrich Hirsch is a 76 year old Jewish man who was a WWII survivor. He bought Curtis' old power from Seth and went back in time to kill Hitler. He failed, and caused the creation of an alternative timeline where the Nazis won the war. In this alternate timeline, he got locked up in prison and was later killed by Captain Smith. After Kelly restored the original timeline, it was revealed that he is still alive.

Retrieved from "https://e4-misfits.fandom.com/wiki/Friedrich?oldid=27116"
Community content is available under CC-BY-SA unless otherwise noted.