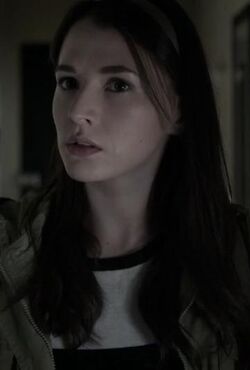 Grace is Finn's half-sister, who has the power of Life Preservation.

After searching for a while for his biological father, Finn came across with last option, Dan. He went to his address and Grace opened the door and the two of them had a conversation about the possibility of them being brother and sister. Before letting Finn see her father, Grace told him that he is sick. After Finn had left, Grace came to check on Dan and used her Life Preservation power to keep him alive. Dan told her that she couldn't keep him alive forever.

Next day Dan told Finn to make Grace let go of him for good. Finn takes Grace for a walk, but before he can say anything about their father, Finn sees Alex with another guy walking to the car park. Finn tells Grace to follow him, and they take video of Alex and the man changing a package and money, and Finn thinks that Alex is paying a man for sex. When Alex is about to discover them (because of Finn's phone rang), Finn uses his telekinesis powers to distract him and Grace realises that she isn't only one with a power (allthough she never admited having one to Finn).

They go to the bar where Finn tries to blackmail Alex for Jess, unsuccessfully. When Alex and Jess leave, Finn and Grace have drink. Rudy appears and while Finn warns him about flirting with her, Grace is flirted with by another man. Finn tries to make sure that man doesn't have AIDS (to Grace's annoyance), but gets pushed down by the guy, who gets pushed against the table by Grace. Later Grace watches when Finn draw moustaches on a sleeping Rudy. He tries finally to talk about their father, but Grace passes out.

The next morning, Grace comes back to her home and drives Dan's nurse away, preparing to use her power to save her father again. Finn arrives and tells Grace what their father wanted him to tell her. Grace thinks Finn is lying and tries to strangle Finn with the cord from a lamp, but soon stops, telling Finn that she only kept Dan alive for herself. Dan wakes up and has a final conversation with his daughter and son. After that, Grace and Finn leave Dan's body at the apartment and Finn leaves. Back at Community Centre, Finn tells Rudy that he can't flirt or have sex with Grace.

Grace's ability is to stop the dying from actually dying returning them to a few hours before death, she gained this power in the storm as a reflection of her desire to keep her father alive who was suffering from terminal cancer.

Retrieved from "https://e4-misfits.fandom.com/wiki/Grace?oldid=24003"
Community content is available under CC-BY-SA unless otherwise noted.