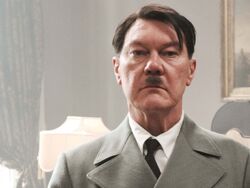 Adolf Hitler was the leader of the Nazi party. An alternate timeline was created when Friedrich used time reversal to go back in time and attempt to kill Hitler. Hitler, however, overpowered the old man and stabbed him with his own knife. Hitler then found Friedrich's mobile phone and used its technology to advance the Nazi technology. This caused the Nazis to win the war and take over Europe and the rest of the world. However, this is undone by Kelly, when she used the time reversal power to go back to a point after Hitler had injured Friedrich so that she could take the phone back and headbutt Hitler so the Nazis wouldn't have the technology needed to win the war. While there, she also kicked him a few times, stating "Why have you gotta be such a dick".

Retrieved from "https://e4-misfits.fandom.com/wiki/Hitler?oldid=26809"
Community content is available under CC-BY-SA unless otherwise noted.