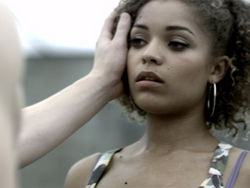 Effects
Immunity to the abilities of others.
Inverse power
Unseen, possibly the power to be influenced by powers even more than normal
Usage
Unconscious
User(s)
Simon
Victim(s)
Simon
Appearances
Episode 3 (Series 2)
Episode 8 (Series 3)

Immunity is the power to be unaffected by other peoples abilities. Simon has this ability at the end of Series 3 when he goes back in time, therefore he is not influenced by the abilities of the group. As such he could touch Alisha without her power driving him into a sexual frenzy, his thoughts could not be heard by Kelly, he would be unaffected by Brian's Lactokinesis, Vince's Tattoo Manipulation, Tanya's Body Immobilization and Jen's Body Swap.

The immunity power has no affect on powers that are not directly being used on the immune individual. e.g. it did not affect Tim's perception of Simon in his Video Game Hallucinations and it did not stop Simon from seeing Lucy in her shapeshifted form.

At the end of Series 3, Seth said that the immunity was the first power that he had ever sold. It is also the first power he ever took from someone, as he was taking the plastic off of his new desk, and this presumably means that he first bought, and then sold the power of Immunity.

Retrieved from "https://e4-misfits.fandom.com/wiki/Immunity?oldid=28094"
Community content is available under CC-BY-SA unless otherwise noted.