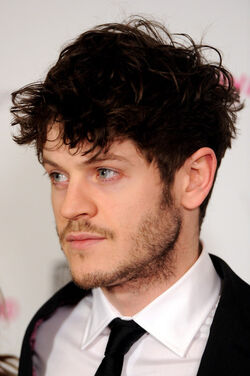 Iwan Rheon (born 13 May, 1985) is an Olivier Award-winning actor and musician who portrayed Simon Bellamy in Misfits, from Series 1 to Series 3.

Rheon joined Welsh soap Pobol Y Cwm, aged 17, where he played Macsen White, but later left to train at LAMDA. His first notable stage part came from the play Eight Miles High which was staged in 2008 at the Royal Court Theatre in Liverpool.

Later in 2008 he was cast to play the role of the haunted Moritz Stiefel in the London production of the Tony Award-winning rock-musical, Spring Awakening. He played this role from January 2009 at the Lyric Hammersmith, and continued it when the show was transferred to the Novello Theatre, until it closed in May 2009. He earned a What's On Stage Award nomination for Best Supporting Actor in a Musical, and has been nominated as Best Supporting Actor in a Musical by the Olivier Awards, which he won in 2010.

Immediately after Spring Awakening, Rheon was cast in the E4 channel's Misfits. On 20 December 2011, Rheon announced via Twitter that he had left the show, along with fellow cast member Antonia Thomas.

In 2011 he also appeared in the final episode of Secret Diary of a Call Girl. In 2011, he was nominated for a Golden Nymph in the "Outstanding Actor - Drama Series" category for his role in Misfits as Simon Bellamy. Rheon also made two guest appearances as the character Ben Theodore in Simon Amstell's comedy Grandma's House.

In early 2012, Rheon filmed the crime heist drama Wasteland with Luke Treadaway and Matthew Lewis and in spring 2012, he began shooting Alberto Arvelo's Libertador with Edgar Ramirez in Venezuela and Spain. He plays Daniel O'Leary to Ramirez's Simon Bolivar. In May 2012, it was announced that he had signed on to David Leon's gritty drama Driven.

He has since been cast as Ramsay Bolton in the HBO series Game of Thrones and in the ITV sitcom Vicious with Sir Ian McKellen and Derek Jacobi.

Songwriting and singing since the age of 16, he was lead singer in The Convictions until leaving the band to pursue his acting career. In 2010, he recorded his first solo work, Tongue Tied EP, at RAK Studios in London. An accomplished 4 track release with acoustic guitar and voice, the EP was released digitally in June 2010. He returned to RAK Studios, in April 2011, to record his second EP Changing Times, with the addition of 3 backing musicians. Changing Times was released on 10 October 2011. In a February 2012 radio chat with  AWAL OnAir Radio, Rheon announced that he was currently working on a full-length album.

Retrieved from "https://e4-misfits.fandom.com/wiki/Iwan_Rheon?oldid=27534"
Community content is available under CC-BY-SA unless otherwise noted.