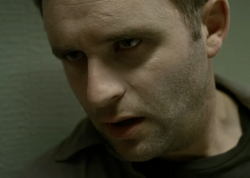 Jack is a minor character who appeared in one episode of Series 3. He was Seth's next-door neighbour in his apartment block.

Jack decided to pay Seth a visit one afternoon, but was instead greeted by Shannon, Seth's recently resurrected ex-girlfriend. After being invited inside and told to wait in the kitchen, Shannon attacked Jack and bit him on the arm. Moments later, an unconscious Jack came to and, confused and angered by the attack, returned to his own flat.

Later, when the Misfits gang arrive to kill Shannon, she and Seth managed to hide in Jack's flat and wait until they left. However, Jack succumbed to Shannon's bite wound earlier and turned into a zombie. Before he could bite Seth, however, he was killed by Shannon, who bludgeoned him over the head with an iron.

Retrieved from "https://e4-misfits.fandom.com/wiki/Jack?oldid=24690"
Community content is available under CC-BY-SA unless otherwise noted.