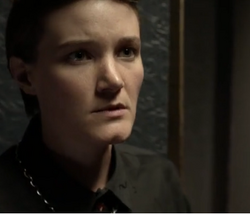 James is a transgender man who was first seen in S4E7. He received the power of Body Part Swapping in the Storm. This power was used to steal Alex's penis at an unspecified time before the start of Series 4. Alex then made numerous events to track him down until he finally found him at karaoke bar. Threatening James with a handgun, Alex  demanded his penis back. As Jess arrived, James then took a broken bottle to Alex's penis and threatened to mutilate it unless Alex stopped pointing the gun at him. Alex then turned the gun to himself, not wanting to live without his penis. James, feeling sorry for him, returned his penis.

Retrieved from "https://e4-misfits.fandom.com/wiki/James_(Series_4)?oldid=24024"
Community content is available under CC-BY-SA unless otherwise noted.