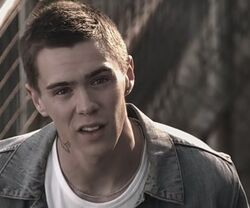 Jamie was conceived when Nathan's father had an affair during his marriage to Nathan's mother. Initially jealous of Nathan in the belief that he had a better relationship with their father, Jamie hit his father with a toaster and dumped him in a car boot while he went to 'confront' Nathan, only for the two to end up bonding during the subsequent meeting.

Later that night, Jamie joined the group - along with Lily, a bartender at the pub Nathan and Jamie had visited earlier - at a club, but the pills he gave the group resulted in their powers being temporarily inverted; Kelly was unable to stop herself from saying what she was thinking, Alisha's power inspired loathing rather than lust in those she touched , Curtis 'flash-forwarded' rather than going back in time, Simon attracted attention rather than turning invisible , and the ice-generating Lily accidentally burnt Jamie to death when the two were having sex and the car they were in exploded.

Nathan, who had become mortal once again, was almost killed by the shrapnel, as he had gone to the car for Jamie and Lily.

As an apparent side-effect of Nathan's immortality, he was able to see Jamie's 'spirit' after his death, Jamie encouraging Nathan to spend time repairing his relationship with his father before he vanished with Lily's spirit, the two now apparently in a relationship (mouthing "I'm fucking her" as he left).

Retrieved from "https://e4-misfits.fandom.com/wiki/Jamie?oldid=30889"
Community content is available under CC-BY-SA unless otherwise noted.