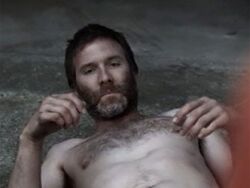 Jeremy is the current boyfriend of Nathan's mother, who is the reason Nathan was kicked out of his home. He is found one morning by the Misfits whilst they are doing community service; it is revealed that come nightfall, the storm has reinvigorated his relapsed memories of a childhood pet, and he believes that he is a dog.

In this condition he walks, or rather lopes, the streets naked. Owing to his unclothed state, the Misfits observe his large penis size, which Nathan later uses to prove to his mother that he has, indeed, seen the man out and about in a very natural way.

Retrieved from "https://e4-misfits.fandom.com/wiki/Jeremy?oldid=17628"
Community content is available under CC-BY-SA unless otherwise noted.